Seniors are spending less than before

Seniors are spending less than before 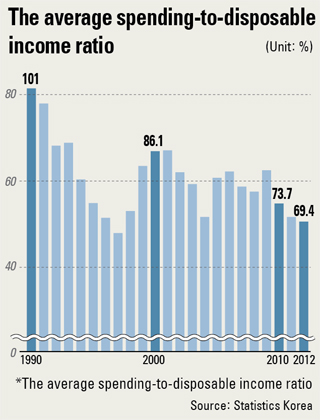 Mrs. Lee, a housewife who recently turned 60, didn’t do much shopping for Christmas presents for her grandchildren this year.

“I just don’t have much money to spend,” Lee said. “With my husband retired for the last five years and our investments in stocks and bonds not doing too well because of the economic slowdown, I thought maybe I’ll give a pass to Christmas this year.”

Mrs. Lee is not alone. Consumers aged 60 or over are tightening their belts, analysts say, almost to the level of the late 1990s, when the country was hammered by the Asian Financial Crisis, or IMF crisis in local parlance.

Analysts say this is particularly so for people whose wealth is largely in real estate, with the market stagnant for years. Mrs. Lee owns several pieces of real estate.

According to a study by Statistics Korea, spending accounted for 69.4 percent of total disposable income of households whose members are 60 or older in the third quarter.

This is the lowest figure since the 66.7 percent posted in the third quarter of 1997.

The ratio was also the lowest since data specific to age groups was first compiled in 1990.

The only time spending exceeded disposable income was in 1990, when the ratio posted 101 percent. This meant that people were spending more than they had as the economy was expanding at an exceptional rate.

“The elderly are constrained in their spending not only because of debt but also because many have investments tied up in real estate,” said Kang Joong-koo, a researcher at LG Economic Research Institute.

The study showed that 81 percent of older households had their personal holdings tied up in real estate. This is higher than the overall average of 69.9 percent.

As real estate has been stagnant or falling, particularly since the global economic crisis of late 2008, people over 60 were the only age group who saw their personal assets shrink.

Older households’ debt shrunk 10.9 percent compared to a year ago. That means that the elderly are repaying their debts, another reason why they are not spending.