It takes 5 years to save up for a jeonse payment

It takes 5 years to save up for a jeonse payment 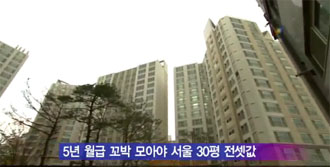 It will take nearly five years for the average Korean to save up enough to get a 84-square-meter (904.17 square-feet) apartment in Seoul by jeonse, or lump-sum deposit-based rental, according to a report from local real estate company Real Today.

More Koreans are trying to lease apartments rather than buying them because the property market is in a funk. Jeonse is a unique lease system in Korea, where the tenant pays roughly half the market price of the unit up front as a deposit and gets the money back after the expiration of a contract. The owner usually earns interest on the deposit.

After analyzing data from KB Kookmin Bank, Real Today said yesterday that the jeonse price of an 84-square-meter apartment, a popular apartment size, in Seoul was 248.93 million won ($231,886) as of Dec. 14.

According to last year’s data from Statistics Korea, an average household with three people or less in the city area earns 4.25 million won per month. Based on these numbers, it would take 4.9 years for the average Korean to save that amount of jeonse without spending any money, the research firm said.

According to Real Today, in wealthy areas like Gangnam, it can even take more than seven years to save up for an apartment.

An 84-square-meter apartment in Seocho District costs an average of 377.85 million won in jeonse, taking 7.4 years for an average city worker. Seocho District had the largest rise in jeonse payments out of Seoul’s 25 districts. For the first 11 months of this year, long-term housing deposits for apartments throughout Seoul rose 2 percent, but in Seocho, it jumped 5.9 percent.

The cheapest jeonse in Seoul was in Geumcheon District, averaging 171.57 million won. If an average salary men saved his money for 3.4 years, he could move there.

“With insufficient supply of jeonse-available apartments and a slump in real estate, even those who can purchase houses decide to pay jeonse,” said Yang Ji-young, a research team leader at Real Today. “As the market doesn’t seem to be recovering, the jeonse price hike is likely to continue.”

According to a report on household finance and welfare made jointly by Statistics Korea, the Financial Supervisory Service and the Bank of Korea last week, the average jeonse was 92.74 million won this year, up 23.7 percent from 2010. In the same period, the average income increased 12 percent to 43.8 million won.

With rising jeonse deposits, people are borrowing more from financial institutions, according to the government report. For the first 11 months of this year, the Korea Housing Finance Corporation guaranteed a total of 7.4 trillion won in jeonse loans, more than double during the same period of 2010.

According to report, Korean households with debt had an average of 27.95 million won of jeonse deposit loans this year, 36 percent more than two years ago.

President-elect Park Geun-hye campaigned on a plan to solve this “rent poor” problem. Under the proposal, house owners would be encouraged to take loans from a bank rather than getting jeonse deposits from their tenants. In turn, the tenants would have to pay the interest on those loans, a bit like paying a regular monthly rent.