[Sponsored Report] Herbal cosmetics with a hint of Korean tradition

[Sponsored Report] Herbal cosmetics with a hint of Korean tradition 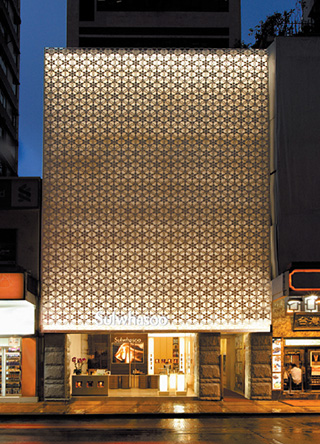 The Hong Kong flagship store was launched in June 2009 at Tsim Sha Tsui on Canton Road.

With herbal science leading the way, Korea’s beauty products have started to make waves in markets around the world.

Consumers across Asia and the United States are beginning to take notice of Korean products’ unique qualities. At major department stores in the United States, they are now being stocked alongside luxury cosmetics, clearly showcasing the nation’s traditional colors to an international audience.

At Neiman Marcus, a luxury department store in the United States, the ShineClassic special-edition makeup line by Sulwhasoo, a high-end cosmetics brand of Amorepacific, has been presented to consumers in beautiful displays and listed in holiday gift recommendations for buyers.

Last year, a well-known department store buyer who saw ShineClassic Compact at an event hall in New York became fascinated with the traditional Oriental beauty represented by Sulwhasoo and so it has been introduced as a year-end shopping item.

Sulwhasoo first advanced to the overseas market in September 2004 in Hong Kong. Later, it entered the U.S. market in 2010, China in 2011, and Singapore, Taiwan and Thailand this year.

The line on sale in the United States consists of five items specifically chosen by the buyer out of those released by the company in the past 10 years. Lattice pattern (2003), Ornamental tile (2004), Seven treasure (2005), Plum blossom (2008) and Floral pattern (2010) hit shelves at 42 U.S. department store branches after Thanksgiving Day as well as online stores.

Customers who saw the round cases were reportedly reminded of old lovers and appreciated the traditional Korean beauty.

Makers of Sulwhasoo believe that the product has become so popular among consumers because it has grown to be uniquely valued for its precious ingredients and herbal medicine based on high-level research technology.

Ingredients including ginseng, pine tree, prunus mume flower and camellia provide specific benefits to the skin, body and mind, and help them find balance based on traditionally held beliefs about Korean culture and emotion.

The herbal ingredients used in Sulwhasoo are 100 percent top-grade Korean. To secure a safe and reliable supply chain that is also efficient, the company signed a joint agreement with the agriculture and life sciences college of Kangwon National University. Together, the two institutions have established an herb garden and conducted joint research on herbal cosmetics. The Amorepacific herb garden takes up 3,300 square meters (0.8 acre) at the university and is growing 400 kinds of Korean herbal medicine ingredients.

The ingredients used in Sulwhasoo have received special attention as the manufacturer is committed to using Korean-grown ingredients that are certified as being 100 percent environmentally friendly. To reach its goal and ensure the safety of its products, the company continuously conducts tests for metal, pesticide and sulphur dioxide content.

This attention to detail, when combined with high-level technology, ensures production of quality product. At the Amorepacific R&D Center, the herbal cosmetics and herbal science research teams concentrate Sulwhasoo. Outside experts from the oriental medicine college at Kyung Hee University and the agriculture and life sciences college at Kangwon National University and many more are also participating, bring the total number of people working on the project to 500.

The significant resources devoted to this project reflect a major shift in thinking about cosmetic products. In the past, herbal cosmetics were a rare concept, but in recent years, Amorepacific has created many new technologies in the specialized field.

Currently, the brand holds roughly 200 patents related to herbal medicine and skin care and participated in research leading to 300 theses. This new era of research, which employs nanotechnology, focuses on Sulwhasoo. Of the registered patents, there are 138 related to ginseng, setting a record for research on the herb.

One of the techniques is the “poje” method meant to maximize the effect of each ingredient in cosmetic products. So, Sulwhasoo’s ingredients were improved from 2009 through poje. For the first time in herbal cosmetics, the company adopted the “ripening” method in making the trademark product and applied the poje method in order to create the best results for consumers around the world.

But in pursuing the very best technology in the industry, the company has tried hard not to forsake the product’s traditional roots, realizing that the natural beauty and emotion appeal to consumers.

Sulwhasoo’s design includes the beauty of Korea and the colors of Orient. Calligrapher Haejeong Song Gyeong-sik created a blended logo of delicately soft colors as if a sunset in autumn is showing a glimpse of modernity.

Though the product was first launched in 1997, Sulwhasoo’s packaging was redesigned before entering the Hong Kong market in 2004 in collaboration with a Japanese designer in order to better reflect Asian tastes. The 2008 Lumitouch makeup line featured packaging created by a French company.

To quicken growth of sales in international markets, the company partnered with a French company which worked with Louis Vuitton and Jean Paul Gaultier on design in 2009. The resulting look was elegant but active, expressing demure beauty and emphasizing the texture of pottery in order to grow more international while remaining true to Korea’s natural aesthetic. 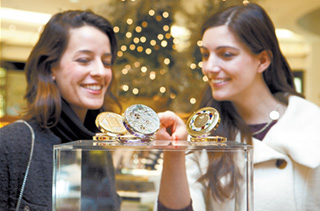 Customers at Neiman Marcus are fascinated by Sulwhasoo’s exquisite ShineClassic Compacts, where they were introduced as year-end shopping items.

The marketing strategy, based on Korean traditional thinking, has made the Sulwhasoo herbal brand the pride of Korean culture thanks to its ingredients, scent, manufacturing process and design. It is now a luxury medicine which has no rivals when it comes to representing Korea.

Of the specialized products, First Care Activating Serum, launched in 1997, has since become a hit with nine bottles sold per minute in 2011, according to the company. It recorded 100 billion won ($93 million) in sales, marking a record for a single Korean product. Each year, the cosmetic stands as a major pillar of Sulwhasoo’s fame and is chosen as one of the best in the industry by beauty experts and the media. Applied immediately after washing the face, it is even popular abroad in markets such as Hong Kong.

Concentrated Ginseng Renewing Cream has also been popular since its launch in 2000 and is one of Sulwhasoo’s long-running best sellers. The product was introduced at the U.S. luxury department store Bergdorf Goodman in New York and was selected as a “best pick” in October 2010.

At home, foreign visitors have also come to appreciate Sulwhasoo. The brand exceeded 4 billion won in sales in October at the Lotte Duty Free Shop in Sogong-dong, central Seoul, often called a shopping mecca for tourists. Accumulated sales in 2012 reached 44 percent in growth, while sales to Chinese tourists increased by 60 percent, showing popularity in a quickly growing market.

In total, department store sales for Sulwhasoo reached 100 billion won in 2009, the first for a single cosmetics brand. Brand-wide sales exceeded 700 billion won in 2010. This year, sales are expected to exceed 850 billion won. The company is aiming to achieve 1 trillion won in sales in 2015 - the mark of a truly global mega brand. Sulwhasoo has also increased its international presence at important events, further expanding opportunities for sales growth.

During the Korea?Asean Summit in 2009, the cosmetic was presented in a package of gifts prepared for delegates and their spouses. The brand was also given to participants in the Group of 20 Seoul Summit 2010 and the Group of 20 Seoul Speakers’ Consultation 2011, making the symbol of luxury herbal cosmetics an important representation of Korean traditional culture on the political stage.

Should Sulwhasoo’s upward swing continue, it is on track to become a leading force in cosmetics the world over. Increasingly savvy consumers will be watching.