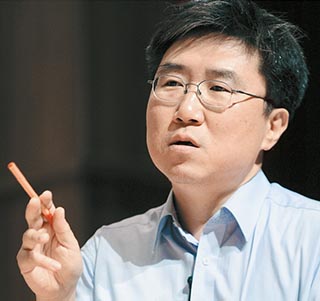 Chang Ha-joon, the world-renowned global economist and economics professor at Cambridge University in the U.K., granted an interview on the path that President-elect Park Geun-hye and the next leadership ought to take for the coming years.

Only two days after the presidential election was held last Wednesday, Chang openly emphasized such subjects as welfare, social unity and national industrial strategy throughout the four-hour long conversation in his lab in Cambridge.

The professor insisted that the new government must place the Korean economy on the springboard for growth once again through investing in technology development, growing specific industries and establishing the welfare system.

Q. What did you think when you first heard the news of Park’s victory in the presidential election?

A. I had a lot on my mind. Whoever comes into power, it is a difficult situation and anyone would face a tough time. It was not easy to determine whether Park’s win in the election was the right thing to happen or not.

When you said you had a lot on your mind, does that imply you disapproved of the result?

I saw the president-elect not being able to clean up the history of the past as a huge problem. Although it must have been difficult for Park to deny her father Park Chung Hee, and recognize his misdeeds, she still should have been able to say what went wrong was wrong. Park left a few loose ends with it, which will likely continue to spark controversy over time. As the father of the president-elect has left distinctly positive and negative elements in the country, such as the remarkable economic growth and the dictatorship degrading the values of democracy, I thought it should have been handled more thoroughly.

How do you perceive the positive and the negative elements of the Park Chung Hee era?

The late president achieved a high level of economic growth. It was not just an achievement simply by squeezing workers, but rather a tremendous accomplishment achieved by industry advancement policy. However, Park also ruled with dictatorship and repressed the laborers. Laborers’ rights could not all have been protected, but they were unnecessarily repressed, and that was a big problem.

His daughter has become the next president. What is the task given to Park Geun-hye?

Park promised that she would open the era of unity, where all can unite in harmony. She said she would strive to win the hearts of the 48 percent who did not support her. I hope she really meant it and will not waver. It does not end by hiring some of those who are on the opposite side. Park must create a welfare system that will allow citizens to live at ease and make the country work for the people.

From all around the world, the cost of studying diet pills is 20 times higher than the cost to research combating malaria. Every year, about a million people lose their lives to malaria. It is a natural business in a market economy, caused by the demand of the rich countries. But is this really right? Preventing such incidents is economic democratization. It is the government constraining actions contrary to social interests by imposing regulations on the market. It may also be expressed as implementation of social justice and a fairer society.

There were many pre-election promises regarding “economic democratization,” such as restructuring the governance structure of chaebol or banning the cross-shareholding of chaebol groups. President-elect Park also promised to prohibit cross-shareholding among affiliates of large conglomerates.

“Economic democratization” is not to strengthen the rights of minority shareholders and prevent cross-shareholding among affiliates. Such a problem is only the fight between shareholders. Also, weakening the mighty power isn’t always democratization.

Then what is real economic democratization? How is it related to chaebol?

Of course, the economic democratization includes reformation of chaebol. It should fix problems of chaebol not recognizing labor rights, avoiding taxes, escaping from regulations and squeezing subcontractors. However, issues like labor strikes of Ssangyong Motor and Hanjin Heavy Industries & Construction, protecting small businesses and mom-and-pop stores and job insecurity are the real problems that people continuously deal with, not just the governance system.

That is some really naive thinking. Aren’t there problems of exploiting subcontractors and irregular workers at non-chaebol companies like KT and Posco? How many small and medium enterprises exist in the country? Dismantling chaebol is not the answer to the problem.

Rather, chaebol should be encouraged to cooperate with subcontractors and invest in developing technology and creating jobs. The unemployment problem cannot be solved by simply inhibiting chaebol from operating bakery stores. The government must come up with fundamental policies regarding expanding the welfare system, training for re-employment and growing new industry.

In this presidential election, all candidates especially focused on commitments on welfare instead of promising to achieve certain economic growth as usual.

That is the power of democracy, which did not happen overnight. After the financial crisis in the late 1990s, the polarization of the haves and have-nots accelerated and employment stability crumbled with the opening of the capital market and influx of speculation. The neoliberalism ideology expanded, and everyone blamed themselves for getting fired from their jobs and not being able to make money. People focused on studying Toeic [exams], developing qualifications to get a job and digging for investment ideas and opportunities. Nothing seemed to make it better. Then, they voted for the current President Lee Myung-bak, who promised to make them prosper. But it went bad, or made the situation even worse. People started to realize that studying hard and investing well was not everything. They started to think that the poverty did not only come from their faults, and recognized the importance of social welfare.

What did the Lee administration do wrong?

Not only the current government but the three governments for the past 15 years all went in the wrong direction. However, President Lee was even more aggressive. When the direction is wrong, working hard becomes more problematic. Do you remember when Lee included a British person in the transition team to make a financial hub in Korea? It did not happen due to the global financial crisis in 2008 and the strengthened international regulation. If Korea made the financial hub, it would have gone bankrupt like Iceland or Ireland. It was the greatest fortune that the financial crisis came about at the beginning of the regime.

Park vowed to eliminate the gap between the rich and poor. How could that be achieved?

The United States has a few regulations and a few taxes. That is why the income inequality is severe. Japan has fewer taxes but more regulations. There are many regulations to protect small farmers and business owners. Europe has moderate regulations and a lot of taxes. As Korean society has a strong sense of equality, it is dangerous to adopt the model of the States. It is inevitable to follow the European model of society.

But Park said she would not raise taxes.

In order to create a strong welfare state, the government must increase taxes. We cannot suddenly do it overnight, but we should gradually do so. Paying taxes does not mean your money is disappearing. People should think that they are making a group purchase for insurance, instead of individually applying for insurance.

What are three things you would suggest to the president-elect?

First of all, Park must put her welfare commitments into action as soon as possible. As time passes by, opponents could impede the process with the reasons of the world economic situation. By inviting entrepreneurs, laborers, journalists and professors Park should organize the framework of the economic policy that is yet to be properly established.