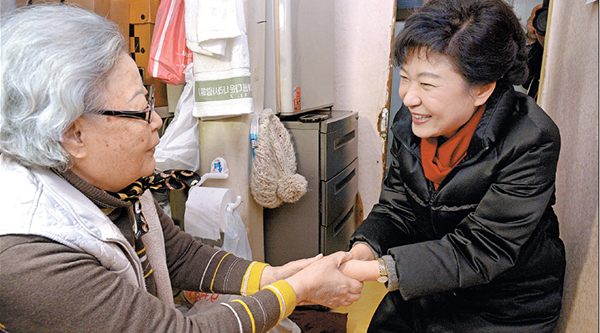 
President-elect Park Geun-hye filled four key positions of the next administration, choosing candidates who are neither close to her or from her political stronghold of Gyeongsang.

During the campaign, Park said she would run a government of national unity and harmony with appointments that were inclusive.

Park said yesterday that she looked for special skills in the candidates.

“Specialties are important [in appointments],” she told reporters yesterday after a Christmas Day of volunteer work at a Seoul shantytown.

“Recently, I heard that some state-run corporations or organizations are parachuting officials into positions that they have no special skills for,” she said. “I think that’s wrong and it shouldn’t happen.”

Lee Jung-hyun, a supreme councilor of the Saenuri Party and a close aide to Park, made the announcement Monday of the president-elect’s appointments.

Saenuri Party figures said the appointments were a surprise because none of the four were close to Park.

Chief Secretary Yoo and Chief Spokesman Yoon are not well known by the media and neither worked for Park’s campaign.

Born in Seoul, Yoo, 56, is a two-term lawmaker from Songpa District, southern Seoul, and is known as a tax expert with a doctorate in economics from the University of Pennsylvania. He worked at several state-run economic policy think tanks and used to be a member of the National Assembly’s Strategy and Finance Committee.

Yoo is also the only son of Yoo Chi-song, a liberal at the time of the dictatorship of Park’s father Park Chung Hee. His father was also the founder and chairman of the Democratic Korea Party, the main opposition party under the Chun Doo Hwan administration, although the party was later criticized for cooperating with the Chun dictatorship.

“Yoo has conversed with Park many times over national policies at meetings of the National Assembly’s committees,” Lee said.

Yoo convened a press conference after the announcement Monday.

“I assume that the president-elect selected me as a policy maker,” Yoo added. “I think my role is to understand and lead her transition team in order to turn her pledges into specific polices.”

Yoon, the chief spokesman, is from South Chungcheong, a former reporter at major broadcaster KBS and a senior editorial writer at the Munhwa Ilbo. He is known as a conservative columnist, writing on his home page about current political affairs.

Spokeswoman Park, from North Jeolla, was a former spokeswoman of the Lee Myung-bak administration. Spokeswoman Cho, from Seoul, is a proportional lawmaker of the Saenuri Party who worked on Park’s campaign.

None of the appointees were from the Gyeongsang provinces, the home of Park’s so-called loyalists.

Park said she will try to unify the nation by selecting people regardless of their gender, background or home province.

The main opposition Democratic United Party lashed out at the appointment of Yoon because of his far-right columns.

“In his latest columns, he denounced the DUP’s former candidate Moon, calling him ‘an anti-ROK [Republic Of Korea] person,’?” Park Yong-jin, a DUP spokesman, said yesterday at a briefing.

Yoon held his first press meeting yesterday and apologized for his columns.