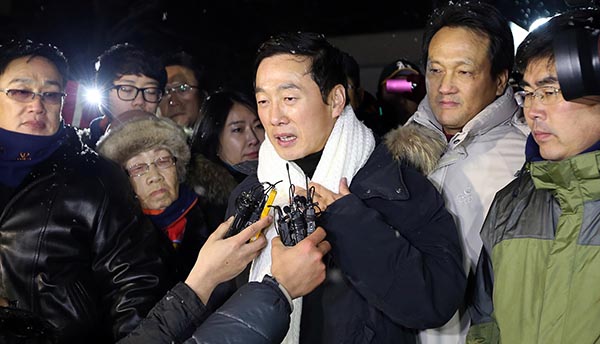 Chung Bong-ju, a member of the popular political podcast Naneun Ggomsuda, or “I’m a Petty-Minded Creep,” greets his supporters after his release yesterday at midnight from prison in Hongseong County, South Chungcheong. [YONHAP]


Chung Bong-ju, a former lawmaker and member of the popular political podcast, Naneun Ggomsuda, or “I’m a Petty-Minded Creep,” was released from jail in Hongseong County, South Chungcheong, yesterday at midnight after serving a one-year-prison term for spreading false information about president Lee Myung-bak when Lee was running for president in 2007.

“I will not join the “Naggomsu” [abbreviation for Naneun Ggomsuda] anymore,” said Chung during a phone interview with the JoongAng Ilbo yesterday. “People were disappointed in the Democratic United Party for its tendency to polarize politics.” Chung added he acknowledges that he did “not communicate well with people with different thoughts” and plans to reach people through speaking engagements.

Chung, an ex-lawmaker of the Democratic United Party’s predecessor Uri Party, was put behind bars on Dec. 26 last year after the Supreme Court upheld a one-year jail sentence given by a lower-court, which found him in violation of election and defamation laws, triggering criticism from liberal supporters that the court ruling was politically motivated.

At the Hongseong Correctional Facility, an estimated 500 supporters as well as some opposition Democratic United Party lawmakers such as Park Young-sun and Jung Chung-rae waited for the liberal figure outside the prison gate to greet him at midnight.

“I wish President-elect Park Geun-hye success as president,” said Chung from a makeshift stage on a truck in a parking lot near the prison. “I am sorry that I was not able to help [the liberal camp] during the general and presidential elections in the past year.”

Chung added that unless the liberal camp showed the people its vision for the country in earnest, it will “face another disaster in five years.”

Nicknamed the “BBK sniper,” Chung raised a series of allegations of financial fraud against Lee, then the Grand National Party’s presidential candidate, on the eve of the 2007 presidential elections.

Following Lee’s presidential victory, the president-elect faced an independent counsel investigation and was cleared of the accusations. The prosecution indicted Chung in February 2008 on charges of violating the election law by spreading false rumors against a candidate.

Chung rose to fame following his appearance on the political podcast, along with three other hosts who largely lampooned incumbent president Lee and the ruling Saenuri Party.