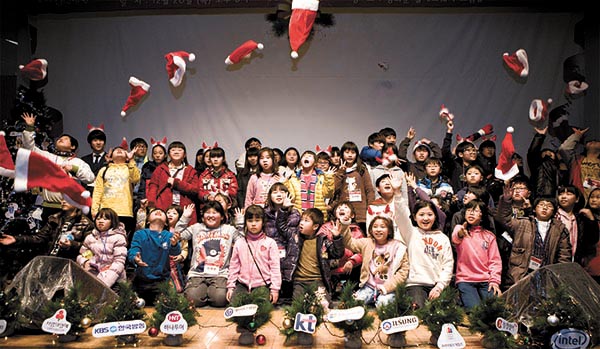 Children from low-income families and donors gather together at a Christmas party in Gwanghwamun, central Seoul on Thursday. In order to grant wishes for these children from difficult situations, 22 corporations gathered together with charity network Dream Together for a 100-day “Christmas Miracle” campaign. By Kwon Hyuk-jae


For three children who grew up in rural Korea in low-income families, meeting their role model, the Secretary General of the United Nations Ban Ki-moon, was but a far-off dream.

Three years ago, 12-year-old Cho Eun-bi’s father left home and he has not been heard from since. Not long afterwards, her mother told her, “I promise I will come see you on your birthday” and also did not return.

Currently, Cho lives with her brother in a foster home in North Gyeongsang. The instructors at the local children’s welfare center became like older sisters and mother-figures to Cho, filling her with worldly knowledge and teaching her to love not resent and hope not despair. And Cho fostered her dream of becoming the first female United Nations Secretary General.

“If I become a person like Secretary General Ban, I will be able to help other children like me whose parents live apart,” she said. 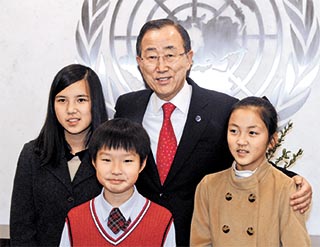 To attain her dream, she took step-by-step measures starting from learning English. Her confidence was boosted when she won an award at an English speaking competition hosted by the U.S. Embassy in September, after which she was filled with an even greater conviction of wanting to meet Ban.

“The impetus behind achieving your dreams is not your environment but your own determination and effort,” said Lee Suk-chae, chairman of KT, who heard of Cho’s wish and met with her last month. “You will definitely make your dreams come true.” She also appeared on a radio broadcast and shared her story with listeners, and UN officials passed on Cho’s story to the Secretary General.

And her prayers were answered. Ban sent her and two others an invitation to the United Nations.

For the first time, the three received passports and on Dec. 15 departed from Incheon International Airport, leaving Korea for New York, made possible by a corporate charity network, Dream Together.

Their airplane flights were sponsored by Korean Airlines, and the children were able to tour key attractions in the Big Apple such as the Empire State Building and Rockefeller Center. They also learned about sacrifice and tragedy at the site of the World Trade Center terrorist attacks on Sept. 11, 2001 in lower Manhattan.

But the highlight was on Friday, meeting Ban Ki-moon in his 38th floor office in the UN headquarters in east Manhattan.

“The children are still young and come from difficult family situations but it is admirable that they hold the dream of meeting the UN Secretary General and becoming important figures in society,” Ban stated upon meeting the three kids.

Yim asked, “How do you feel losing your position as the most famous Korean person worldwide to Psy?”

“I am proud that through Psy Korean culture was able to spread throughout the world,” Ban replied regarding the “Gangnam Style” rapper, who became a global phenomenon in the past year. “I would like for there to be more talents like Psy in the future.”

Half a century ago, Ban said he had a similar opportunity as these children. When he was a senior in high school in 1962 he was invited to the United States on an American Red Cross trip for 100 teenagers around the world and met U.S. President John F. Kennedy. He resolved afterwards to devote the rest of his life to public service.

And to provide such an opportunity, 22 corporations including KT, KBS, Maeil Dairies, Daemyung Resort, Ilsung Construction and Intel Korea, Hana Tour joined together to make possible Dream Together, a charity network which made feasible the dreams of some 100 low-income family children.

Besides sending the three children to New York to meet the UN Secretary General, Dream Together made possible a cleft lift surgery for one girl and held a gathering where kids could meet their favorite singer.

The campaign saw over 8,000 donors who contributed on the Dream Together Web site, Facebook or telephone. A wide range of people contributed to the “The Miracle of 100 Days of Christmas” including pro-golfer Kim Dae-hyun and singer Lady Jane, as well as some 60 Hallyu fans including those from Hong Kong, Singapore and Thailand who donated $4,600 through Dream Together’s honorary ambassador, singer Kim Jong-kook’s Facebook page.

On Thursday, hundreds of donors and recipient children gathered together at the Gwanghwamun Olle Square in central Seoul for a day of celebration. Kim Yu-ri from Gyeonggi, a 13-year-old aspiring musician, learns piano but has limited practice time at her local children’s center.

Kim received a digital piano from Seokyung University’s Music Society, and a 21-year-old piano major of the school volunteered to become her mentor and the two performed for the crowd on their first joint stage.

Park Hye-rin, 12, dreamed of going to Jeju Island, where her parents went for their honeymoon and her wish was granted as well.