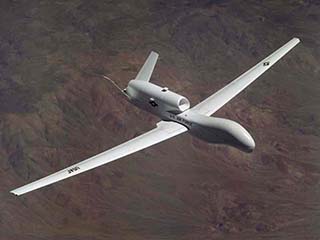 The deal under the Foreign Military Sales (FMS) program, if sealed, would be worth up to $1.2 billion (1.28 trillion won), according to the Defense Security Cooperation Agency (DSCA) affiliated with the Department of Defense.

Such a notification to Congress is mandatory for FMS sales. Congress is expected to approve the plan, a diplomatic source said.

“The Republic of Korea needs this intelligence and surveillance capability to assume primary responsibility for intelligence gathering from the U.S.-led Combined Forces Command in 2015,” the agency said in a press release.

It was referring to Seoul’s move to take over wartime operational control of its troops from Washington.

The Korean military has long sought to introduce the high-altitude unmanned aerial vehicles made by Northrop Grumman, based in Virginia.

The U.S. was apparently reluctant to sell it to Korea, but Washington has changed its position amid defense budget cuts. The U.S. military has scaled back the purchases of Global Hawks, ratcheting up the need for exports.

Critics question the capability of the Block 30 Global Hawk for its price. Yonhap