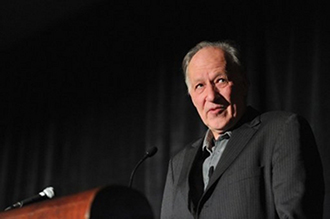 LOS ANGELES - German filmmaker Werner Herzog is taking a rare turn in front of the camera as a cold-blooded murderer in the new thriller “Jack Reacher,” portraying a character he calls “the epicenter of evil.”

“Jack Reacher,” the Christopher McQuarrie film which just opened in North America, sees Tom Cruise back in action mode as a former military investigator, after his detour into musical comedy with “Rock of Ages”.

This is the first time that Reacher - a popular character created by British author Jim Grant (who writes under the pseudonym Lee Child) and hero of about 20 novels - has been depicted on the silver screen.

In the film, Reacher teams up with Helen Rodin (played by Rosamund Pike), the lawyer of a sniper accused of killing five people and taken into custody.

While the lead investigator (David Oyelowo) wants to secure a quick confession, the suspect tells the police to find Reacher. And he soon finds someone much more dangerous pulling the strings: The Zec, played by Herzog.

Herzog cuts an imposing, glowering figure, so it might seem an easy acting transition for the German to play really bad guys. And he likes it that way.

“People know that I’m good at it. They’ve seen me in other films. I’m just an obvious choice,” he told AFP. “And I know that in the few things and those limited things I’m doing as an actor, in what I’m doing I’m good. I leave a lasting impression.”

In “Jack Reacher”, Herzog’s character is nothing short of “the epicenter of evil,” the director/actor said. “I did my job, because I’m really scary. That’s all there was to do.”

The presence of Herzog - whose films and documentaries, from “Fitzcarraldo” (1982) to “Cave of Forgotten Dreams” (2010), have earned critical acclaim on the art-house circuit - in an American blockbuster may seem a bit surprising.

But for Herzog, “Jack Reacher” is more than just a popcorn blockbuster.

“I think there is a very strong sense of stylization. And you also don’t see this kind of film noir very often,” he said. “In a way, it reminds me of Melville, some of it. And the solitude of the character - he doesn’t have a place. Almost an empty room, one bird in a cage.” AFP