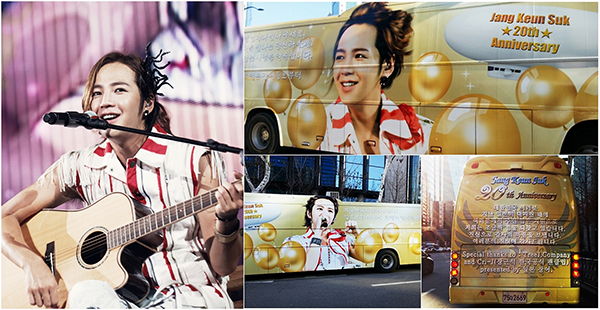 This year is an anniversary that seems to go on forever for Hallyu star Jang Keun-suk. To celebrate his 20th year in the industry again, his fans in Japan have rented out and decorated a bus with their own messages and pictures of Jang.

The bus, which will drive around town from Gangnam, southern Seoul to Myeongdong, central Seoul for the next month, has a message of thanks from the Japanese to the Koreans.

“To the people of Korea, thank you so much for your support since the Japanese tsunami disaster last year. We are slowly regaining our strength, we thank you again,” read the bus.

Pictures of Jang can also be seen with the words “20th Anniversary.”
This is one of many gifts Jang’s followers have offered up to the “Prince of Asia.”

Earlier in the year, fans pooled their money together to decorate some trains on the Seoul Metro, as well as selected stops with posters of Jang.