A group of single men and women in their 30s and 40s gather from across the country at Daesung Temple in Okcheon County, North Chungcheong, with anxious parents at their side.

They are not in the Buddhist sanctuary to pray for a future spouse. These singles are ready to mingle with the help of Monk Hyechol, a legendary matchmaker.

“I heard this temple is famous for matchmaking and that the couples rarely divorce if they meet here,” said Kim Ok-ran, a 76-year-old mother who drove three hours from Seoul to get to the Taego Order temple. “I hope my son will find the right one.”

She looked at her reluctant 37-year-old when she added, “My last wish before I die is to see him marry.”

The increased independence of women and the trend of furthering careers before starting a family has led to unprecedented growth in the number of singles in Korea.

The average ages of a couple that married last year were 31.6 for the man and 29.2 for the woman, according to Statistics Korea. That is a significant change compared to 2001, when the average man was 29.6 years old while the woman was 26.8.

Living a single’s life for an extended period of time can be torturous in Korea. The holiday season is tough for loners everywhere, but a Christmas grilling session by Korean relatives would have anyone scrambling for more eggnog.

This is where religious institutions come in. The pressure to date has led many to churches and temples in hopes of finding a match.

“People here take marriage more seriously than those on dating Web sites, and the religious background will likely provide a sense of closeness and credibility even on the first date,” Monk Hyechol told the Korea JoongAng Daily. 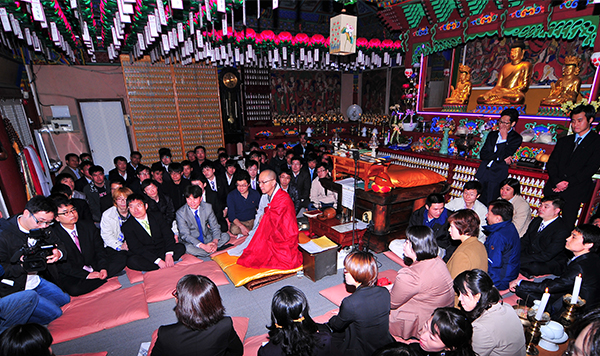 A group of single men and women listen to instructions given by legendary matchmaker Monk Hyechol at Daesung Temple in Okcheon County, North Chungcheong, prior to a matchmaking event. Provided by the temple


Following television appearances and his biography “A Monk is a Matchmaker” published this year, the temple has seen its matchmaking project take off.

The number of registered members currently exceeds 4,000 and the membership of the temple’s online matchmaking service (www.singletemple.com) has reached 2,000.

The temple doesn’t charge any fees, but most spouse-seekers pay at least 100,000 won ($95) as a token of appreciation for the monk’s efforts and prayers.

Monk Hyechol embarked on his journey of love when he spotted an increasing number of wandering lonely hearts in the temple in 2005.

“I casually arranged meetings for the sons and daughters of my followers when I thought a man and woman might be compatible, and most of them were successful.

Non-Buddhists are allowed to take part in the matchmaking events, but Monk Hyechol asks them to comply with the religious traditions in the temple.

The occasional event has now turned into a regular “Meeting Ceremony” every Sunday starting from 10 a.m., attracting some 20 new members and 70 registered guests on average every week.

“A friend of mine introduced me to this temple. She is meeting someone here,” said a 33-year-old woman who asked to be referred to by her surname, Kim.

“I’d like to find my ‘Mr. Right’ here. It’s hard to find ‘the one’ within my small circles in life. I know that waiting around for something to change isn’t going to produce the results I want,” she said. Kim took a three-hour train ride from Busan to get to the temple.

A fresh register like Kim is required to fill out profile information ranging from her name, occupation, family, educational background, height, weight and income. The back side of the document is mostly about the specific type of person one wants to meet.

A photo is also required. The member’s image should be a passport photo, Monk Hyechol says, because digital photos can be heavily Photoshopped.

The monk’s wife analyzes the documents of the day’s participants and organizes dates based on the profiles, while the monk oversees the entire operation of the partner-seeking process and offers prayers for the enrolled singles.

If a member fails to find a suitable partner during the first visit, he or she can visit again and is guaranteed “permanent membership.”

“Some parents make deep bows and even cry out in relief and joy during a wedding ceremony. Whenever I see them, I feel responsible and cheer myself up,” said Hyechol with a quiet chuckle. 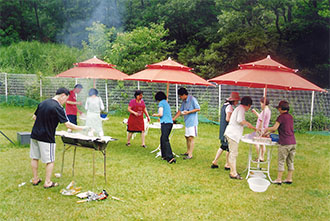 Monk Hyechol isn’t the only one cultivating a spiritual response for lovelorn singles. Priests at local churches are increasingly playing Cupid.

The Presbyterian Church of the Lord in southern Seoul has held a four-week matchmaking program three times a year since 2009, which involves such activities as folk dancing, cooking and mountain climbing. The program usually invites 20 men aged between 32-40 and 20 women who are 30-36.

“Korean churches don’t engage much with its members when it comes to marriage because they may consider marriage a private matter,” said Kong Gwang-seung, a priest who organizes the events.

“But we need to offer guidance on attitude when seeking and meeting a life-long companion. This program involves instructions on the subject and, at the same time, provides the opportunity to meet partners.”

The participants come from different churches and various regions, but all require referral letters from their pastors. With the number of people wanting to take part in the activity exceeding the spots available, Father Kong adopted an interview process to select participants.

“When interviewing people, I consider how much one is prepared for marriage,” Kong said.

He recently shared his matchmaking expertise with other churches seeking to embrace such a program.

“There are lots and lots of church members who look for this kind of event. They want to meet like-minded people of the same faith. But there is a risk to meeting someone in the same church because it could be disastrous after a break-up,” Kong said.

Some churches provide matchmaking services for specific groups of singles. Ezer Church in Guro District provides one-on-one dating programs for widowers or divorcees with a membership fee of 300,000 won.

“I lost my wife a few years ago and went through a very hard time. I didn’t want to meet anyone back then, but now I want to have a new partner,” said Son Seong-ki, who is in his early 50s.

“I think I can meet someone outside of church. But I feel people in the secular world are too obsessed with wealth rather than a happy life,” Son said. 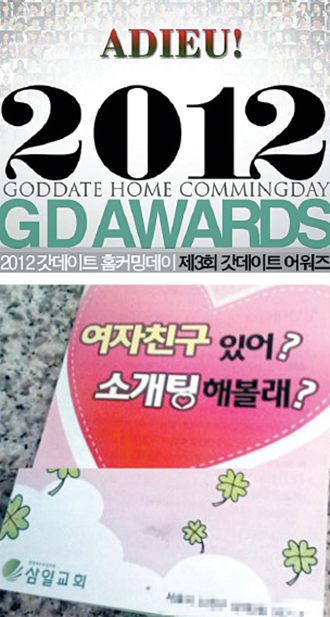 Top: A church promotes its year-end dating event for church members. Above: A promotional leaflet of Samil Church that fueled concerns that dating programs can be used to lure in more followers.

“I think the idea of a church or temple as a matchmaker is drifting into dangerous territory. The primary task of religious institutions is to serve God or spiritual practices. But if they hold programs like this, they can be distracted,” said Kim Mi-young, a 27-year-old atheist.

Others make the case that matchmaking events can send a wrong message to the faithful.

“I think the church has an extremely critical role to play in building partnerships by providing a potentially positive environment that will allow Christian singles to meet one another. To go beyond that, however, may be misleading,” said Park Jung-ho, a 28-year-old Christian.

“If the church were to actively and directly provide a matchmaking service, then it is implicitly sending the message to singles that the status of being married is more valuable or that’s something to pursue. It would disturb people who are entirely okay being single,” he said.

A leaflet of the Samil Church in northern Seoul stoked these concerns. On the front of the flyer, which is meant to attract more church members, it reads, “Do you have a girlfriend? Would you like to go on a blind date?” A similar version for women asks, “Do you have a boyfriend?”

Inside the leaflet are profiles of good-looking female church members.

The church suffered backlash over the controversial promotion and issued an apology on its Web site, saying that “the intention was to let people know that there are a host of people of different types, but that the most important relationship in life is your relationship with God.”

“I know most churches have good intentions. But the idea of matching single believers may bring an undesirable result and distract the holy places,” said Park Jung-ho.