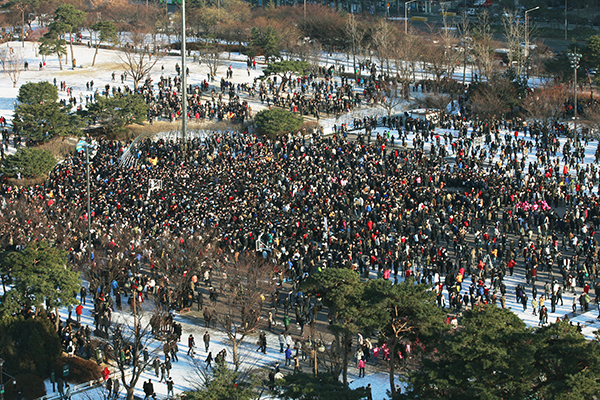 A total of some 3,500 single men and women attended a mass dating event in Seoul, but the scene pictured above shows the vast majority were male. By Park Sang-moon


It is said that Christmas is a time for giving. But when 3,500 singles gathered on Christmas Eve for the largest-ever group blind date, there was not much to take.

The so-called “Battle of the Solos” was a letdown, with the vast majority of attendees single men and the weather too frigid for a scarcely dressed Cupid to work his magic.

The event was a mass matchmaking session for singles organized by two university students with no business ties to any dating Web site. The pair said they simply took pity on singles during the Christmas season, which in Korea is considered by many to be equivalent to Valentine’s Day.

It got off to a promising start. The organizers told participants to meet in Yeouido Park in western Seoul and said men must wear white, women red.

On the way to the site, vendors packed the street selling flowers, hot packs and even shackles. Others handed out condoms for free.

The park was packed with thousands of people wearing their respectively colored ear muffs and winter jackets. One man wrapped toilet paper around his neck to signify that he was very much a participant in the event.

The Youngdengpo Police said that a total of 3,500 people attended, but only 1,000 took part in the matchmaking. That number was only a small fraction of the registered members and, more tragically, 70 percent of the attendees were men, according to the police.

“It’s like a military boot camp down here. I can’t see any women around me,” said Kim Ji-hoon, a 24-year-old university student.

“I didn’t expect that much, but this is worse than I expected. I didn’t want to be alone on Christmas, but this year is the same as last year,” he said with a sigh.

A group of curious exchange students also made their way to witness the dating project.

The organizers originally floated the idea of herds of men and women gathering on opposite ends of Gwanghwamun, central Seoul. When the two groups heard the signal, the students proposed, they would run toward each other and grab the hand of someone to take on a date.

They posted the audacious idea on Facebook last month and it instantly went viral with some 36,000 people saying they would attend.

Inspired by the Seoul event, singles in other cities including Daejeon, Daegu and Busan also called for a mass blind date on Christmas Eve.

A series of companies such as outdoor apparel brand K2 said they would allow single employees to take a day off on Christmas Eve and 200 other companies offered to sponsor the event.

There was so much hype around the event that the Seoul city government decided to deploy 1,000 policemen as a precautionary measure.

Yoo Tae-hyung, one of the organizers, stayed in the back of the park, watching the astonishing number of wandering male souls.

“I think I failed to smoothly organize this event,” he said. “I’d like to improve it for next year by learning from the mistakes.”