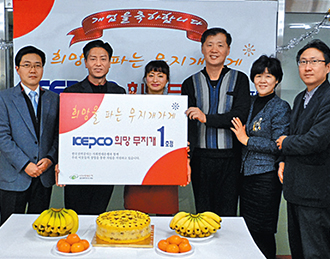 Kepco launches the first branch of the Hope Rainbow project, its program to assist low-income people with starting businesses.

Thanks to an unyielding focus on supporting the community, Kepco has been labelled a role model for companies committed to social contribution activities. Its activities earned the corporation the so-called Global Top Green & Smart Energy Pioneer status, which recognizes benevolent activities by companies.

In a continuing effort to live up to its title, Kepco announced at its headquarters on Oct. 10 a new vision of social responsibility. It reorganized a new overseas volunteer group and social company support team in addition to the Kepco social volunteer team and 119 National Rescue Service.

“The most important social contribution activity for a company is creating jobs,” the company said at the launch ceremony. “By raising social awareness, Kepco will stand to lead in providing stable jobs to the disadvantaged and resolving polarizing social conflicts.”

As part of this movement, Kepco is planning to sign an agreement with nonprofit organizations to provide support worth 200 million won ($186,400) each to social enterprises up to 1 billion won per year. Kepco is planning to offer instruction on power supply inspection and electricity facilities as well as assistance with sending mail, purchasing staff uniforms, and MRO (maintenance, repair and operation) work.

As part of these efforts, a social enterprise business opening fund has been raised from 2004 through the “Love Fund,” which consists of money donated by employees with a double matching grant from the company.

In addition, the company collected small amounts from employees’ salaries to fund the Hope Rainbow Project that spent 180 million won on five social enterprises to help improve their management.