[Sponsored Report] Posco workers come together for a cause

[Sponsored Report] Posco workers come together for a cause 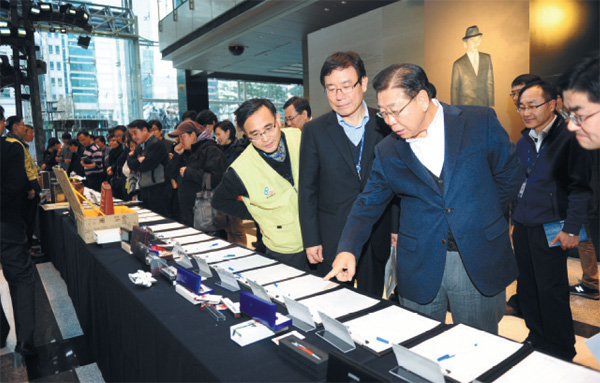 
Posco is working hard to create a society where all classes can live well together. In Korea, it is offering support to multicultural and low-income families, while overseas it is partaking in emergency relief activities and customized programs that benefit various communities, fulfilling its role as a global corporate citizen.

Posco employees have been participating in charity and sharing social contribution activities voluntarily, pioneering in the sentiment of noblesse oblige. Since last year, high-ranking executives of Posco affiliates participated and raised 1.4 billion won ($1.3 million) in one year. The program allowed for the employees to donate 1 percent of their salaries and have the amount be matched by the company to be given to charity.

The 1 percent sharing movement is now showing some results and the fund raised through this campaign will be used in various fields. Some 500 million won is used for the Happy Steel House construction, a facility for elders in Pohang which started construction in October. Mother country language education, a project for multicultural families will receive 300 million won and 2014 Incheon Asian Games multicultural volunteer group raising project will also receive 100 million won support from this campaign.

In addition, Posco held the charity fund-raising flea market together with Korea Food for the Hungry International on Dec. 17 and donated its profits to low-income families. At this flea market some 4,350 items were donated, of which 4,100 items found a new owner.

The charity auction which was held in conjunction with the flea market had 350 items donated by 150 Posco family executives, including the CEO Chung Joon-yang, further raising funds to be given back to society. Posco has been participating in social contribution activities since it was founded and it is now moving away from for-display mentality and one-time activities to a more continuous and voluntary sharing culture within the company. Posco designates every third Saturday as a volunteering day that on average 5,000 employees participate.

In 2010, Posco inked an MOU with the Ministry of Gender Equality and Family and prepared various programs to assist multicultural families, either by supporting in startup business, job search or simply language assistance.

Posco stands in the fore when it comes to helping the disadvantaged in the society.