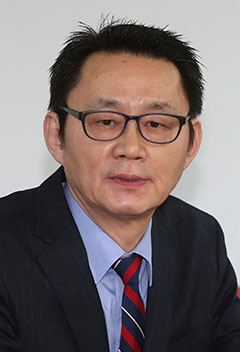 The opposition Democratic United Party stepped up its attacks on the newly-minted spokesman of President-elect Park Geun-hye, demanding he step down because of his politics.

“Appointing Yoon Chang-jung to chief spokesman is the first error that President-elect Park Geun-hye made, showing her unilateral style of appointment,” Representative Yun Kwan-seok, a DUP spokesman, said at a briefing yesterday.

“Yoon, who is an obstacle of ‘national harmony’ and ‘grand national unity,’ should immediately resign.”

Park made a surprise appointment of four key posts on Monday for the next administration, including chief spokesman Yoon.

None of the four newly-appointed officials was close to her or from her stronghold region of Gyeongsang.

As part of her efforts to unify a nation divided by region, generation and ideology, Park has pledged to select people regardless of their region or background.

However, the DUP is saying it’s inappropriate to choose Yoon because of his conservative columns.

The 56-year-old Yoon was a former reporter at major broadcaster KBS and the Korea Times, and also a senior editorial writer at the conservative Munhwa Ilbo newspaper.

He is known as a conservative columnist, posting his writings on his home page mostly criticizing liberals. He also worked in the presidential secretary office under the Roh Tae-woo administration in 1992.

In his column, written on Dec. 18, a day before the presidential election, Yoon called supporters of DUP’s presidential candidate Moon Jae-in “political prostitutes” and “dirty dogs only chasing power.”

He also said if Moon is elected, many people will turn pro-North in the country, so in order to prevent this, “people of the ROK [Republic Of Korea] should defeat ‘the anti-ROK people,’?” who support Moon, by casting ballots in the election.

In November, Yoon also condemned the former independent runner Ahn Cheol-soo, who dropped out of the race and endorsed Moon as a single liberal candidate.

He said Ahn is “a cunning person” who pretends to be “a martyr” and the coalition among Moon, Ahn and another liberal candidate Sim Sang-jeong was “a dirty collusion.”

Facing growing criticism, Yoon apologized for “people who would have been hurt by his remark” at his first press conference on Tuesday.

However, he maintained that he also criticized Park, so it’s not true that he has a far-right bias.

A series of high-profile politicians condemned the appointment.

Park Jie-won, a former floor leader of the DUP, said in a radio interview with CBS that the appointment of Yoon “is regressive toward national harmony.”

Kim Hyong-o, a former Saenuri lawmaker and former chief of the transition team of President Lee Myung-bak, said Park should have considered “whether the candidates have a political bias or not.”

Saenuri members were also perplexed because most of them didn’t know about her decision until she announced it.

Lee Jung-hyun, a spokesman for the Saenuri Party, said that most Saenuri members didn’t know anything about Park’s appointment at all.