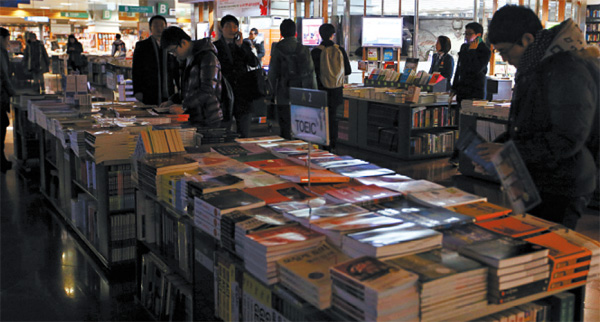 Customers of the Gangnam branch of Kyobo Bookstore in southern Seoul stand in darkness yesterday after a blackout at around 1:30 p.m. [NEWSIS]


As the bitter winter cold continues to bring the threat of power outages, four buildings near Gangnam Station in southern Seoul were plunged into darkness yesterday afternoon for a half hour or more.

The Korea Electric Power Corporation said the blackout was “caused by a disruption in power lines” buried underground in the affluent Gangnam areas, not a shortage of electricity.

There were no casualties reported from the incident.

“Though we issued preliminary warnings earlier in the day as the power reserves went below 4 million kilowatts, the reserves bounced back to a stable level by the time the sudden blackout occurred,” said Kim Uk-joon, public relations official at the power corporation.

The Kyobo Tower, NamSeoul Building, one commercial building and an apartment construction site in Seocho District suddenly plunged into darkness at around 1:30 p.m. yesterday.

Three sites received power again at around 2:00 p.m., while the Kyobo Tower, which houses the Gangnam branch of the Kyobo Bookstore, got power at 2:40 p.m.

The Kyobo Tower ran its emergency generator for elevators and escalators during the blackout period.

A blackout in crowded southern Seoul areas evoked memories of the massive Sept. 15, 2011 blackout caused by a mild cold snap not anticipated by the power company.

According to the state-run power distributor, the average power demand shot to a new high yesterday when it reached 75.89 million kilowatts between 10 a.m. and 11 a.m., replacing the previous record of 75.17 million kilowatts set last Tuesday.

The surge of power consumption prompted the regulator to issue preliminary warnings at 10:44 a.m. yesterday for the sixth time this winter.