National opera in crisis after fire leaves it broke

National opera in crisis after fire leaves it broke 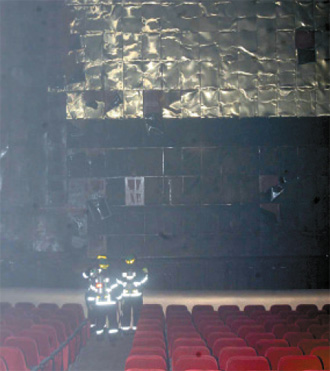 Firefighters are dispatched to put out a fire that began during an opera at the Seoul Arts Center in southern Seoul in December 2007. [JoongAng Ilbo]

The Korea National Opera, founded in 1962, is facing one of its most daunting challenges.

The opera club’s problem stems from a financial burden that now amounts to as much as 7 billion won ($6.5 million) in debt to Samsung Fire and Marine Insurance. The 7 billion won it owes is more than the government assistance of 6.92 billion won it received this year.

The beloved opera club’s troubles started with the light of a match during a play in 2007.

While the Korea National Opera was staging “La Boheme” at the Seoul Arts Center Opera House in December 2007, one of the actors on stage was supposed to throw a match into a stove, but he missed.

A fire broke out and was put out in 20 minutes with no casualties but still caused 19.4 billion won in damages.

The insurance company initially handed over 10 billion won in 2008 to cover recovery costs. Samsung Insurance, however, later brought a case to court claiming the state-run opera club should pay back 6.8 billion won given by the firm as it was the opera club’s negligence in properly managing the theater that led to the blaze.

The Korea National Opera countered the claim, arguing it should not be held accountable for the damage as the play was co-staged with the Seoul Arts Center.

The legal battle between the two lasted for three years and ended in February this year when the Supreme Court accepted Samsung’s claim. The court ordered the club to pay the firm 4.8 billion won.

With an annual interest rate of 20 percent on top of the 4.8 billion won payment, the opera club is now indebted 7 billion won to Samsung Insurance. The stage schedule is already in place with starring members already cast, and the 50-year-old opera club does not have the option to reduce the number of plays to cut costs.

“We are currently in talks with the insurance company over solving this problem,” said Shin Dong-hoon, director at the international cooperation team of the opera club. “Our annual revenue is about 2 billion won, and we are planning to pay the total sum over the long term.”

Samsung Fire insurance, owed 7 billion won by the Korea National Opera, has refrained from taking aggressive action to retrieve its insurance money as it could invite criticism from the public as it is dealing with the national arts group.

The Ministry of Culture, Sports and Tourism, which supervises the opera group, has stood on the sidelines since the Supreme Court’s ruling came out earlier this year with no specific plans announced to solve the problem.

“We increased the amount of financial assistance to the opera group this year mainly for the opera group to gradually pay for the damage,” said an official at the Culture Ministry during a phone interview with the JoongAng Ilbo.

The Culture Ministry has put aside 8.3 billion won for the Korea National Opera’s 2013 budget, about a 20 percent increase from this year’s 6.9 billion won.