Officer suspected of colluding with safecrackers

Officer suspected of colluding with safecrackers 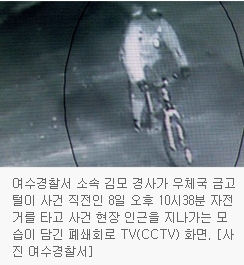 YEOSU, SOUTH JEOLLA - A police officer has been arrested on suspicion of helping to rob a post office vault earlier this month, police said yesterday.

The 44-year-old officer, identified only by his surname Kim, is suspected of colluding with a robbery suspect, surnamed Park, in stealing some 52 million won ($48,408) worth of cash from the vault in this southwestern port city on Dec. 8, they said.

The Yeosu Police Station said they have placed Kim under emergency arrest after obtaining a confession from Park who was apprehended on Thursday.

Investigators suspect Kim as he was caught on closed-circuit TV filming the inside of the post office with his cell phone camera.

Park initially claimed to have committed the crime alone during police questioning but later changed his testimony to implicate Kim, officers said.

Kim is suspected of giving information such as the inside structure of the post office and the location of the vault to Park, the officers said, adding that the two have reportedly known each other for nearly 10 years.

Park allegedly used oxygen cutting equipment to tunnel into the vault from a nearby restaurant to steal the money, they said. Yonhap