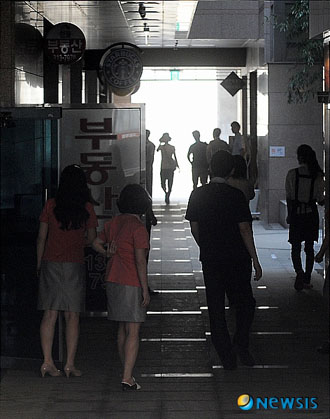 A two-tier emergency drill to prepare for a sudden electricity outage will be carried out nationwide on Jan. 10 as the threat of winter blackouts remains high.

For 10 minutes starting at 10 a.m. the Ministry of Knowledge Economy expects people to voluntarily cut back on unnecessary power use at homes and offices to simulate what would happen if the safety reserve, which is set at 4 million kilowatts, drops below 2 million kilowatts, it said.

From 10:10 a.m. to 10:20 a.m., a second siren will go off indicating that the level has dropped below 1 million kilowatts and as many appliances as possible should be switched off.

“As a winter blackout would cause greater inconvenience and damage than a summer outage, we encourage everyone to participate so they know what to do in case the worst-case scenario becomes a reality,” said Lee Gwan-seob, managing director of the Ministry of Knowledge Economy’s energy resources division.

Many public buildings will be obligated to cut all their power and rely on emergency generators that can produce at least 5 million kilowatts of electricity for 20 minutes.

The government will also monitor emergency lifts at hospitals and traffic lights to see if they keep working as they should - powered by reserve generators - when disconnected from the main power grid.

“The chance of a blackout in January is now higher than ever,” said Lee, referring to the extreme cold spell in winter and the fact that several nuclear power generators have malfunctioned recently.

The reserve has fallen below the “stable” level of four million kilowatts no fewer than six times this winter.

The last emergency power drill was held in June.