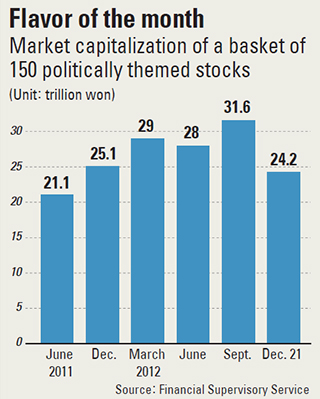 Despite having already picked President-elect Park Geun-hye and suffering estimated losses of 17 trillion won ($15.85 billion) by gambling on “political stocks,” retail investors’ appetite for betting on companies tied to political heavyweights appears to be undiminished.

Demand for shares associated with IT guru-turned-politician Ahn Cheol-soo, who withdrew from the presidential election at the last minute and threw his support behind Democratic United Party candidate Moon Jae-in, remains especially strong, analysts say. He is on record as saying he still harbors political aspirations and public sentiment is apparently much in his favor.

Meeting reporters at the airport upon his arrival in San Francisco one day after the Dec. 19 election, Ahn said he plans to continue participating in politics. This has fed rumors that he will become the center of the newly rising opposition party in by-elections slated for April.

Sunny Electronics, which has ties to Ahn, saw its share price drop 9 percent to 873 won in intra-day trading on Dec. 20. However, as the news of his commitment to politics spread, the stock bounced back to end at 1,100 won, up almost 13 percent from end-of-play one day earlier. Since then it has been on a bullish rally and rose by the daily limit of 15 perent to close at 1,910 won yesterday.

Other stocks linked to Ahn including AhnLab, the computer virus-fighting company he founded, Tamul Multimedia and Openbase - Ahn is close friends with the CEOs of both - saw their shares drop before the election then rebound after it wrapped up.

Although AhnLab’s share price dipped on Dec. 21, it rose on Christmas’ eve and the first day after Christmas. It retreated 4 percent yesterday as investors took a breather but remained at 42,500 won, up 2,800 won from the day before the election.

Stocks related to Park, the daughter of former strongman Park Chung Hee, have also been on the up. The incoming government may restore the nation’s science and marine ministers, which implies a new focus on certain industries after the two posts were merged five years ago at the start of the incumbent Lee Myung-bak administration. Speculation to this effect has also benefited a number of stocks in these areas.

The Park administration is expected to unveil the government’s restructuring plan and submit related bills next month.

But experts warn against placing too much faith in politically-themed stocks as such betting trends ignore companies’ fundamentals and most retail investors have suffered losses.

The Financial Supervisory Service (FSS) on Wednesday released a report stating that retail investors lost a combined 17 trillion won this year from playing with fire either side of the election and targeting themed stocks. The report was based on an analysis of the fluctuating share prices of a basket of 150 politically themed stocks with links, however obscure, to the three presidential candidates. They were tracked from June last year to the end of last week.

The report showed they had fallen by an average of 52.7 percent from their peaks as of last Friday. As a measure of volatility, the median difference between their zeniths and nadirs over the last 18 months was found to be 302 percent. This rose past a whopping 1,000 percent for Sunny Electronics, S-Connect, which has close business ties with AhnLab, and Wooridul Life Sciences, a company that has close relations with Moon.

The combined market capitalization of the basket amounted to 21.1 trillion won on June 1, rose to 31.6 trillion won at the end of September and shrank to 24.3 trillion won last Friday.

“Many investors took a huge hit due to the extremely high level of volatility as they failed to buy or sell at an opportune time,” said an official at the FSS.

Yet investors apparently continue to be attracted to these themed stock like moths to a flame.

Wooridul Pharmaceutical and Wooridul Life Sciences, which have seen their respective values depreciate since Election Day as Moon lost the race, have rebounded recently.

“It’s really impossible to explain how Moon-related stocks continue to rise even though he lost the race,” said one stock broker in Seoul, who asked not to be identified.