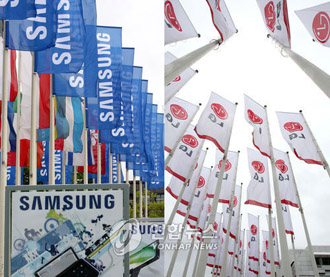 It was belatedly revealed yesterday that LG Display filed an injunction on Wednesday with a Seoul court to ban Samsung Electronics’ Galaxy Note 10.1 tablet PC, claiming Samsung infringed on three of its LCD technologies.

The move comes amid escalating tension between the two tech firms and their affiliates as they have been involved in five litigation battles since April.

On Dec. 7, Samsung Display, an affiliate of Samsung Electronics, raised a suit against LG Display, the world’s No. 2 producer of LCDs, and LG Electronics for violating its LCD patents.

Earlier on Nov. 12, Samsung Display filed a suit against LG Display seeking the invalidation of some of the latter’s patents on organic light-emitting diode (OLED) panel technologies.

In the suit filed with a local intellectual property tribunal, Samsung claimed that seven patents held by LG Display are invalid as they are not sufficiently different from its own.