Paucity of winter tires on icy roads seen as perilous

Paucity of winter tires on icy roads seen as perilous 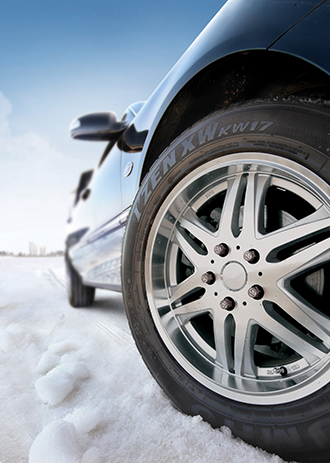 An I’Zen KW17 winter tire manufactured by Kumho Tires is shown in this file photo. Provided by the company


After a white Christmas capped relatively heavy snowfall this December, demand for winter tires is running high but many drivers are finding themselves out of luck and facing out-of-stock signs as many shops battle with depleted inventories despite manufacturers ramping up production.

“Our winter tire sales should increase by an average of 30 percent this year if the trend continues,” an employee at Hankook Tire said. “Early snowfall created more demand and raised greater awareness of our products.”

Hankook has been promoting its I’Cept EVO and I’Cept IZ tires, even offering discounts to consumers who buy an Equus or Genesis in cooperation with Hyundai. Kumho has been advertising its I’Zen series.

However, shoppers are complaining that they can’t get their hands on a set of winter treads in a timely enough manner. Although waiting times vary according to region and tire model, those who live in the Seoul metropolitan area will have to wait at least three days to collect their order, according to tire retailers.

“We don’t have any stock left at this time and I’m sure other tire sellers are facing the same situation,” said Yang Hee-young, who runs a shop in Seodaemun, western Seoul. “People really have to plan ahead and make their purchase before it gets too cold and icy while stocks are up.”

Tire producers said they produce winter tires from August to November based on predictions of demand in order to better control their inventories. As these tires are a seasonal product, they said they have too much to lose to risk mass-producing them.

Critics say this is unfairly inconveniencing consumers and even putting them at risk as they brave icy roads with regular tires.

“Most tire companies will probably stop manufacturing winter tires from the end of this month as they try not to exceed demand,” said Lee Ho-guen, a professor of tire studies at Daeduk College, “especially as they don’t know if it’s going to snow next month or in February.”

According to General Insurance of Korea, a nonprofit organization representing domestic insurers, the number of car accidents increases by an average of 60 percent in Korea when it snows.

In a report, Hankook Tire states that the braking distance for a vehicle using snow tires while traveling at 40 kilometers per hour is 18.49 meters. It takes almost twice as long in regular, four-season tires.

“Winter tires use a rubber compound with a high silicon content, and the cross-tread stays flexible at low temperatures to make for a good braking performance,” Lee said. “Although it can mean more noise and less driving comfort when there’s no snow, it’s extremely useful for hills and driving on slippery roads.”