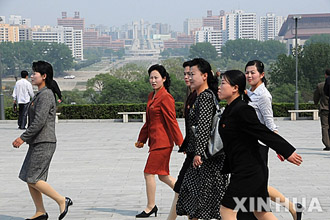 The North Korean economy grew for the first time in three years in 2011, adding 0.8 percent, while its per-capita gross national income (GNI) stood at 1.33 million won ($1,240), Statistics Korea revealed in a report yesterday.

In contrast, South Korea’s per-capita GNI stood at 24.92 million won, 18.7 times higher than that of the North. GNI is net income from abroad plus gross domestic product.

As inter-Korea relations have soured during the five years of the Lee Myung-bak administration, the North’s dependency on trade with China has expanded significantly, the report said.

While inter-Korean trade volume has declined, the Stalinist regime’s trade with China accounted for 70 percent of its total imports and exports last year, which stood at $6.3 billion. Its trade with China jumped 13.2 percent to $5.62 billion. 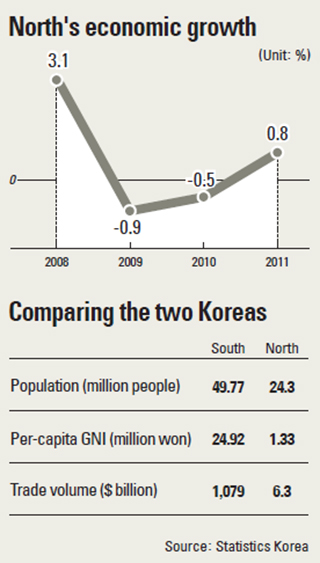 “If the North’s agricultural production increases and its trade with China continues to grow next year, the North’s economy may slightly improve,” said Hong Soon-jik, a researcher at Hyundai Research Institute.

But he refused to discount the possibility of unexpected developments, such as further sanctions on the regime, which recently violated UN Security Council resolutions by using ballistic missile technology to send a satellite into orbit, or side effects of President-elect Park Geun-hye’s potentially hard-line policy towards the North.

The agency also disclosed the size of the North population, which at 24.3 million is roughly half the size of the South’s. The average life span of a North Korean is 65.1 years for men and 71.9 for women, whereas South Korean men can expect to live until 77.5 and women until 84.4 on average.