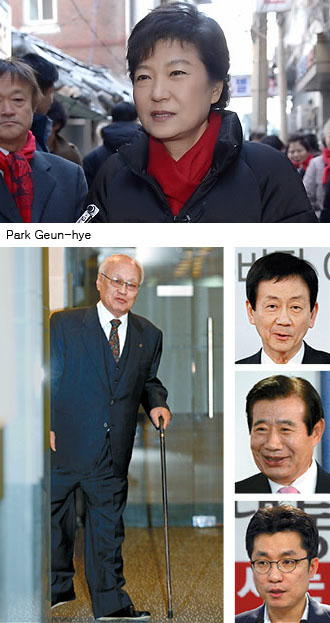 Kim Yong-joon, left, newly appointed chairman of the transition team, walks out of his office in Yeouido, western Seoul, to a press conference yesterday. Kim uses a cane since he suffered from polio at the age of 3. [NEWS1]

The president-elect yesterday also appointed Representative Chin Young, chief policy maker of the ruling Saenuri Party, as the deputy chair of the team. She also created two special committees within the team to promote her themes of “grand national unity” and “youth employment.”

Han Gwang-ok, who served as chief of staff in the Kim Dae-jung Blue House, was named chair of the national unity committee. Kim Kyung-jae, another Kim loyalist, was named deputy chairman of the committee.

Proportional Representative Kim Sang-min of the Saenuri Party was appointed to head the committee on youth employment.

The appointments of Kim as the head of her transition team and Chin as deputy head show Park’s determination to stress adherence to the rule of law during her five-year presidency. Both Kim and Chin are veterans in the legal community. Kim is the first legal professional to be in charge of a presidential transition.

Yoon Chang-jung, Park’s senior spokesman, made the announcement at the Saenuri Party’s headquarters yesterday afternoon. Before the press briefing, he opened a sealed envelope and read the appointments and explained Park’s intentions.

Kim, a native of Seoul, headed the Constitutional Court from 1994 to 2000. He joined the Park campaign in October as co-chairman of her election committee.

Kim suffered from polio at the age of 3, but he overcame the disability and entered Seoul National University’s law school in 1954. At the age of 19, he passed the bar exam in 1957 with the top score and became the youngest judge in 1960.

After serving in key posts at courts around the nation, he became a Supreme Court justice in 1988 and chief justice of the Constitutional Court in 1994.

He is respected in the legal community for independent judgments, including his 1963 decision to release a former Army chief of staff detained on charges of writing a statement protesting the presidential bid of Park Chung Hee, the president-elect’s father.

“We believe Kim will strongly support the president-elect’s strong beliefs in the rule of law and public security,” Yoon said. “We also have high expectations that Kim will prepare a smooth transition for Park’s new administration.” 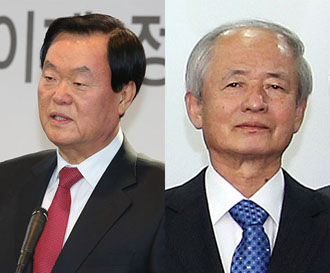 
Chin, a 62-year-old native of Gochang, North Jeolla, passed the bar in 1975. After a brief career as a judge, Chin became a lawyer. He joined politics in 1997 as a special adviser of presidential candidate Lee Hoi-chang of the Grand National Party, the predecessor of the Saenuri Party.

A third-term lawmaker representing Seoul’s Yongsan District, he served as Park’s chief of staff for 10 months when Park headed the GNP. He was also elected as chief policy maker of the party in May. In the Park campaign, he was in charge of developing her presidential pledges. He also prepped Park for the presidential debates.

“Park has high expectations that Chin will contribute greatly in prioritizing pledges and creating a road map during the process of establishing the new administration’s philosophy and key policies,” Yoon said.

The appointment of Chin also shows Park’s intention to focus on policies during the transition. Representative Yoo Il-ho, whom Park appointed as her chief secretary, is an expert on tax policy and welfare, and Yoo said he understands his role is to turn pledges into specific policies.

It appeared that Park’s main priority in her search for “national unity” is ending the decades-long regional rivalry between Jeolla and Gyeongsang. Both the Grand National Unity Special Committee Chairman Han and Deputy Chairman Kim are senior politicians from Jeolla who spent most of their political careers assisting the late President Kim Dae-jung.

“Han is the best person to push forward reconciliation between the two regions and between the forces behind Korea’s industrialization and its democratization,” said Yoon. “He is expected to contribute greatly to bridge schisms of our society and build a 100 percent Korea.”

For her goal to bring an end to regional, ideological and generational schisms, Park recruited Han to head her grand national unity campaign before the presidential election. Other Kim Dae-jung loyalists including Kim also joined the Park campaign following Han.

Yun Ju-gyeong, director of the memorial foundation for independence activist Yun Bong-gil, and Kim Jung-tae, a civic activist who fought against the authoritarian rule of Park’s father Park Chung Hee, were appointed as committee deputy chairs. So was Dr. John Linton, director of the International Health Care Center at Yonsei University’s Severance Hospital.

Park also appointed key members of her campaign to the transition team.

The special committee on youth affairs is expected to focus on employment.

Park kept the appointments secret until the last minute.

“It’s like a revolving door because the officials just moved from the campaign to the transition team,” said Representative Yun Kwan-seok.