Park to meet with MB to discuss pertinent issues

Park to meet with MB to discuss pertinent issues 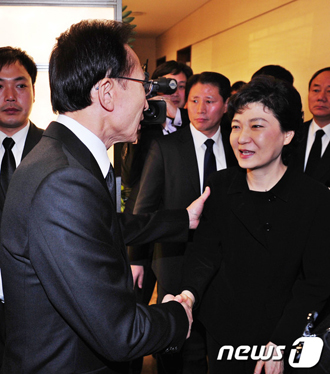 President Lee Myung-bak and President-elect Park Geun-hye will meet today to talk about pending issues in state affairs for a successful presidential transition.

Park Sun-kyu, spokesman of the president-elect, said yesterday that the two leaders are expected to discuss various issues, including the looming economic hardships at home and abroad as well as North Korea, foreign affairs and welfare.

The meeting will take place at the Blue House at 3 p.m. today.

It is their first meeting since Park’s presidential victory last week.

Their last meeting took place on Sept. 2, after Park won the Saenuri Party’s nomination, and they mostly talked about the livelihood of the nation’s economy during the 100-minute discussion.

After Park’s victory, Lee telephoned her to offer his congratulations. The two leaders are expected to talk about a smooth presidential transition.

“We have high expectations that the two leaders will discuss efforts for successful state affairs and more effective policies of the next administration,” Park Sun-kyu said.

Lee has about two months left in his term and Park Sun-kyu noted that it was meaningful for the president to keep his Saenuri Party affiliation until his last days in office.

Since the country restored the direct presidential election in 1987 and introduced the one-term, five-year presidency, Lee is the first president to remain as a ruling party member at the end of his term.

In the past, presidents have severed their ties with the ruling parties in their final months in office.

“It was a historic election because the incumbent president kept his party affiliation,” Park Sun-kyu said.

“Their meeting itself is an important event in the history of Korea’s politics.”

Ahead of the April legislative elections, speculations were high that Lee would also follow the suit of his predecessors and leave the Saenuri Party to give it room to maneuver.

Park, who was the interim head of the party, however, said in March that she didn’t see severing ties with the president as a solution, making clear that she was against the artificial political move.