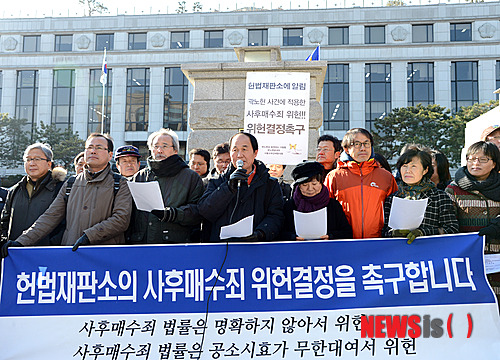 The Constitutional Court ruled yesterday that convicting a person for bribing a former election rival after he dropped out of the race is constitutional, concluding 16 months of controversy over the bribery conviction of Kwak No-hyun, the former superintendent of the Seoul Metropolitan Office of Education.

Kwak ran for the position of education superintendent for Seoul in June 2010, and his liberal rival Park Myong-gee withdrew from the race one day before the campaign began. Kwak won.

Kwak later admitted he paid Park 200 million won ($186,000) after the election but said it was just a “goodwill gesture” to help him with all his campaign expenses.

Kwak was convicted of bribery in his first trial in January and ordered to pay a 30 million won fine. An appeals court in April sentenced him to one year in jail, and the Supreme Court upheld the ruling in September.

At that time, Kwak resigned his post and went to jail. He filed an appeal to the Constitutional Court challenging the constitutionality of Clause No. 232 of the Public Official Election Act, which says it’s illegal to give money or a position to a former election rival after an election in return for his or her dropping out of the race.
The Constitutional Court’s ruling was his last hope to return to his position. The court said yesterday the law has no problem.

“The act’s clause doesn’t violate the principle of clarity or the principle against excessive restriction,” the court said, “because it doesn’t forbid all money transactions regarding an election candidate’s resignation. It aims to punish cases of candidates dropping out of races only for rewards.

“The purpose of this clause is to keep the fairness of the election and set the principle that an election candidate’s resignation is not subject to a deal,” the court added. “It is also effective to prevent candidates from expecting rewards in exchange for dropping out of races.”

Of eight judges, five said the law was constitutional and three said it wasn’t.

The Korean Federation of Teachers’ Associations, a group of conservative teachers who opposed Kwak’s liberal policies, welcomed the ruling.

“Because of this ruling,” the association said in a statement, “Kwak, who said the money was a ‘goodwill gesture,’ has lost his cause.”

But the Korean Teachers and Education Workers’ Union, a liberal teachers’ association, said it can’t accept the ruling because it doesn’t make sense to say giving money after a race is a bribe.

“The so-called ‘ex post facto bribery,’ which is the name of Kwak’s offense, has never been applied in any case so far, and the court applied it only to Kwak,” said Song Won-jae, a spokesman of the union.

Liberals have said that the prosecution of Kwak was a political attack on liberals.