Korea’s super-hacker tracked down in Philippines

Korea’s super-hacker tracked down in Philippines 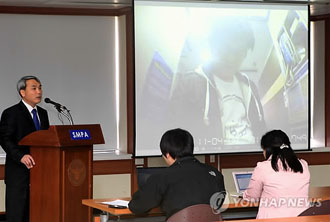 The end of the line for a famed fugitive Korean hacker surnamed Shin came in mid-December, when police in the Philippines found him in Batangas Province, led to him by the earlier arrest of one of his accomplices.

Shin, 39, who became famous for hacking the servers of Hyundai Capital in the first half of 2011, was repatriated to Korea Dec. 14 and is being investigated for hacking.

His history is virtually the history of hacking corporations for fun and profit in Korea.

Shin originally wanted to become a pop singer, and started to learn about computer hacking as a hobby starting in 2000.

He obtained knowledge by chatting on the Internet with hackers abroad and studying computer books.

In 2005, the hobby became his job. Shin hacked into the server of NHN Corporation’s Hangame, an online game portal, and siphoned off players’ cyber money into his account. He sold the stolen game money to other players at discounted price. Hacking looked like a viable living.

Shin also sold a software program he invented, which he used to hack Hangame, to other people.

For those transactions, Shin was arrested by police in Feb. 2005. He was convicted of hacking and jailed for two years until he was released in March 2007.

Jail did nothing to rehabilitate Shin. He moved to the Philippines and started working with illegal Internet betting sites that wanted to eliminate their online rivals. He received 1 million won to 2 million won for each job.

After scraping by on that work, a 36-year-old real estate agent surnamed Jeong made an attractive offer to Shin in 2010. He suggested he hack the server of Hyundai Capital and offered him 10 million won.

Jeong contacted Hyundai Capital and said, “I will distribute your customers’ profiles on the Internet indiscriminately if you don’t wire 500 million won into my bank account.” The corporation paid 100 million won to Jeong.

After Interpol put Shin on top of their wanted list, he distanced himself from other hackers and disguised himself as a Japanese. But Philippine police found him in October at Batangas Province after one of his accomplices surnamed Heo, 41, was arrested in Korea.

Heo was the gang member who received the money from Hyundai Capital and wired it to the Philippines. The police said Heo told Shin’s whereabouts to the police.