Gauge implies industrial activity is back on track

Gauge implies industrial activity is back on track 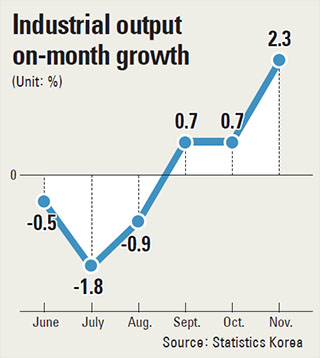 Korea’s industrial output bounced back in November, raising expectations that industrial activity might be picking up, a government report showed yesterday.

According to the report by Statistics Korea, production in the mining, manufacturing, gas and electricity industries gained 2.9 percent last month from a year earlier, turning around from the previous month’s 0.8 percent on-year contraction.

The output also grew 2.3 percent on-month, marking the third straight month of expansion. The service sector production expanded 2 percent in November from a year earlier and inched up 0.8 percent from the previous month.

“Despite declines in the mining, electricity and gas industries, an improvement among manufacturers resulted in a 2.3 percent on-month growth in the industrial output,” the statistics agency said.

Corporate investment, however, remained weak last month as businesses seem to be holding back their spending in the face of lingering uncertainty.

The report showed that facility investment fell 9.3 percent on-year in November, marking the fourth straight month of shrinkage since August. From a month earlier, it also edged down 0.3 percent.

The average facility operating ratios in the manufacturing sector stood at 77.4 percent last month, down from the 78.4 percent tallied in the same month last year. It grew slightly from the previous month’s 75.9 percent.

The latest industrial activity figures come amid lingering concerns that the protracted euro zone debt problems and uncertainty over the global economy might continue to affect the country’s exports, which account for more than 50 percent of its growth.

Against the toughened and clouded situations, Korea’s economy is expected to grow 2.1 percent this year and expand 3 percent next year, according to the latest growth estimates by the Ministry of Strategy and Finance.

The outlooks were revised down from their previous forecast of 3.3 percent and 4 percent. The revision is raising worries that the country’s economy might be lapsing into a sluggish mode that falls short of its potential growth.
The grim views are based on the government’s assessment of the current global economic situations, which could dictate the direction of the country’s exports.

According to the ministry, the country’s exports will grow 4.3 percent on-year in 2013, while imports are projected to grow 4.6 percent. It also predicted that the country’s current account surplus will amount to about $30 billion next year, quite lower than this year’s estimated surplus of $42 billion.

“With the persistent uncertainty of the global economy stemming from the fiscal cliff in the U.S. and the euro zone crisis, the sentiment among major economic players including consumers and businesses is improving at a slow pace,” the Finance Ministry said in a report that analyzed the latest output data.

“We will keep our policy efforts to strengthen our economic vitality including boosting facility investment, while keeping a close eye on economic situations at home and abroad,” it added.