A picture-perfect start to the New Year

A picture-perfect start to the New Year 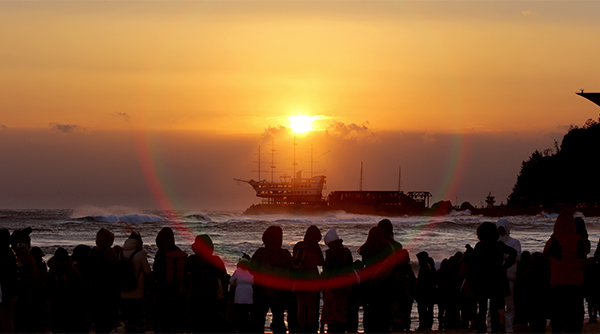 Jeongdongjin, which was featured in popular television drama “Hourglass,” offers a breathtaking view and has become a popular destination for New Year sunrise seekers.[Yonhap]


Thousands of people are set to gather along coastlines to witness the last sunset of 2012 and the first sunrise of the New Year, braving through the bone-chilling cold spell that has gripped the nation.

The sun will hit Korea for the first time in 2013 at 7:26 a.m. on Tuesday morning at Dokdo Island, according to the Korea Astronomy and Space Science Institute. 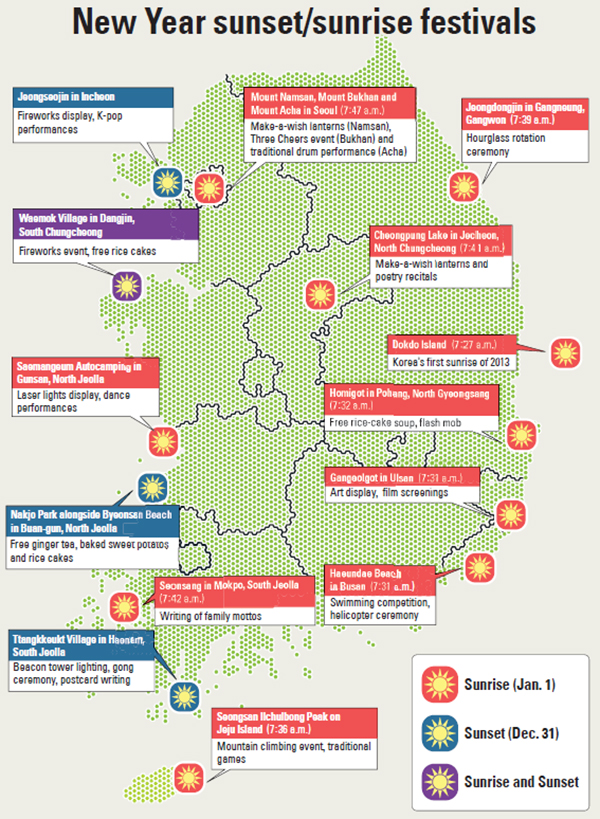 The Ganjeolgot Sunrise Festival is one of the most popular destinations as it is held in Ulsan, where the sunrise can be viewed first on the Korean Peninsula. The New Year event is scheduled to run from 10 p.m. on Dec. 31 until 9 a.m. on Jan. 1 at the Gangjeolgot Cape.

The festival will feature a range of programs including a year-end concert, a fireworks display, film screenings, traditional dance performances and make-a-wish lanterns. There will also be tteokguk (rice cake soup) available, the signature New Year’s Day dish. Gangjeolgot Cape is located near Jinha Beach, which is visited by many tourists every summer. Sunrise is expected to start at 7:31 a.m.

Jindo in South Jeolla is where you can see the last sunset of 2012 on the Korean Peninsula. The island in the Yellow Sea will offer an opportunity to appreciate traditional Korean culture as it plans to play the region’s “Arirang,” or traditional folk songs, during sunset and sunrise.

Jeongdongjin in Gangneung, Gangwon, is a well-known destination for sunrise seekers after serving as a backdrop for the 1995 television drama “Hourglass.” The train station is directly by the beach, which makes it very convenient for visitors to get to the location and even watch the sunrise from the warmth of the station.

A concert is held on the beach on New Year’s Eve featuring K-pop stars to celebrate the arrival of the New Year. Fireworks will accompany the end-of-the-year countdown.

As the sun rises the following day, traditional Korean folk musicians will hold a performance to celebrate the first day of the New Year with an hourglass rotation ceremony. Visitors can also participate in a make-a-wish lantern event where wishes are written on a piece of paper and released into the sky.

At Waemok Village in South Chungcheong, visitors will have the rare chance to see the sunset, sunrise and moonrise in one trip due to its distinct geography. Waemok Village is located at the far west boundary of the Korean Peninsula and the coastline curves into a coast facing the east, creating horizons in both directions. 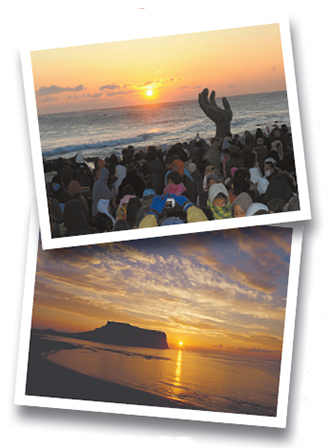 Homigot (Top) in Pohang, North Gyeongsang, and Sunrise Peak (Above) on Jeju Island draw a host of visitors hoping to watch the first sunrise of the New Year. [Ilgan Sports]

When you reach the top of Mount Seongmun you can see a magnificent view of the Yongmuchi neighborhood through Gukhwado in Hwaseong, Gyeonggi. This is the best location to see the sunrise and moonrise between Great Nanji Island and Small Nanji Island.

If you are a Seoulite and don’t plan on leaving the capital city, Mount Acha in Gwangjin District, eastern Seoul, is a solid option. You can see the sunrise from the mountain earlier than any other spot in the Seoul area.

With the sun set to rise at around 7:40 a.m., the Sunrise Festival starts at 7 a.m. on the mountain’s Sunrise Square. It takes more than 30 minutes to get to the square from the mountain entrance, and it will be very packed. It is common to hike up the trail at around 5 a.m. to beat the crowd. Chungsachorong - lanterns covered with red and blue shades - will help keep the 1.5-kilometer (0.9-mile) trail safe.

Even in the heart of Seoul you can capture the sunrise at Namsan Palgakjeong Pavilion in central Seoul to release wish lanterns.

For more exotic views, Seongsan Ilchulbong (meaning Sunrise Peak), on Jeju Island should be high on the list.

The striking archetypal tuff cone was formed by volcanic eruptions some 5,000 years ago. Today, the 182-meter cone forms a conspicuous peninsula on Jeju’s eastern edge.

Only Jeju Island can offer a sunrise against such a distinctive backdrop.

Another frequented spot is Homigot in Pohang, North Gyeongsang, which lures visitors with its magnificent hand-shaped bronze sculpture.

The Homigot Sunrise Festival will host a series of interesting programs, including a “Gangnam Style” flash mob, folk games and a food market.