A family man’s Batmobile with a ‘bed’

A family man’s Batmobile with a ‘bed’ 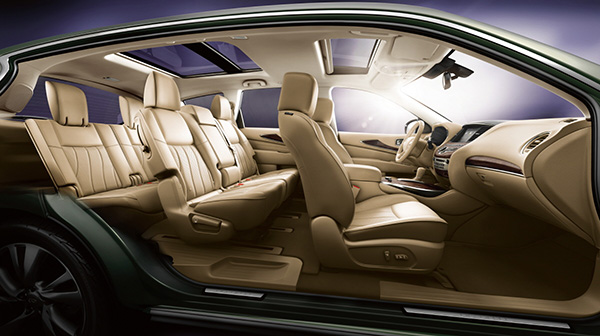 A big selling point is the flexibility of the 2nd- and 3rd-row seats. The former sit on a sliding rack and all can be folded flat. Provided by the company


It was while digging my way out of a fortress-like “love motel” in Jeonju that I finally became seduced by the JX35 luxury crossover, a seven-seater from Infiniti that also happens to boast the ultimate in seat-shifting maneuverability. In other words, you can easily Rubik’s Cube it into a double bed on wheels.

Prior to that, I’d felt more like a harried husband for much of the drive from Seoul due to the litany of complaints about how uncomfortable our party of seven adults was, despite multiple games of musical chairs being played behind me.

From the cockpit, regardless of the power seats, leather upholstery and tilt-and-zoom steering wheel axis, I could feel my friends’ pain. No matter what configuration of buttons I pressed, the seating never resolved itself exactly as I wanted. Perhaps I was spoilt earlier by Volvo’s less glamorous-looking but more hospitable XC90 (still my top pick).

But there’s no sugar-coating the JX35’s 4.2-inch color vehicle information display unit, which was having the stormiest of affairs with an iPad we’d brought along. (Earth to Infiniti: Bluetooth connectivity is great but it takes more than 2 seconds to scroll through playlists, and touchscreens should respond the first time rather than the third and not lead you on wild goose chases.) I also take issue with the lack of lighting when you fire up the engine, which leaves you fumbling in the dark. End of rant.

The JX35 makes great eye candy inside and out but it’s not as sporty in terms of performance as its Infiniti SUV/CUV brethren. However, it exposed more of its aces in a city locals refer to as the bibimbap capital of the world. More precisely, we were buried alive in a subterranean vault in Jeonju, beneath one of those nameless dens of iniquity where students and married couples head for their amorous diversions.

Hemmed in by a viper’s nest of luxury foreign and domestic cars, my bacon was saved by Infiniti’s around view monitor (ARM) with moving object detection feature. In fact, one of the model’s major coups is that it comes armed with an arsenal of driver-assist features including distance control assist, which automatically taps the brakes if it senses danger ahead, dynamic cruise control and an active lane departure system.

This makes it feel like a Batmobile for dads, who become super-heroes by virtue of getting everyone home safely from family outings and who appreciate being able to mentally zone out along the way.

The ARM won me over in Jeonju by facilitating an impossible 14-point extraction maneuver that would have made Austin Powers proud in his luggage cart. External cameras provide a virtual 360-degree image of area around the vehicle in a way that makes exiting and parking easy, safe and, strangely, even pleasurable.

The gap-plugging JX35, a 3.5-liter V6 that sits midway between Infiniti’s five-seat FX and torque-heavy QX, delivers 265 horsepower and 34.3 kilogram-meters of torque. Although there is some lag when you set off, acceleration is otherwise more than adequate. My key reservation would be the whip-lashing that occurs when changing lanes with all the seats occupied at even moderately high speeds.

The vehicle is built on a front-wheel-drive platform with the engine installed sideways but is also available as AWD. The former retails for 66.7 million won ($62,240) and the latter 69.9 million won. It’s the first Infiniti to use a continuously variable transmission, which, coupled with “eco” driving mode, improves efficiency and saves gas. If you don’t want to feel like you’re coasting, or ghosting, along, you can flick to sport mode for more engagement. Topically, it also has a snow mode.

This gives the JX35 competitive fuel economy of 7.5 kilometers per liter (18 miles per gallon) in the city and 9.9 km/l on the highway. While not the most spacious CUV in its class, it scores brownie points for how the second and third rows are designed (as well as its heated backseats). The former is set on a sliding rack that provides ease of access to the latter - without the bother of having to remove a child seat - even if this makes legroom a trade off that usually boils down to who can scream the loudest.

Both sets of seats can be folded down to create a two-person bed (if it were a water bed, think 2,166 liters) for those who balk at the stigma, or fees, involved in spending the night in a seedy, nondescript love motel in Jeonju.