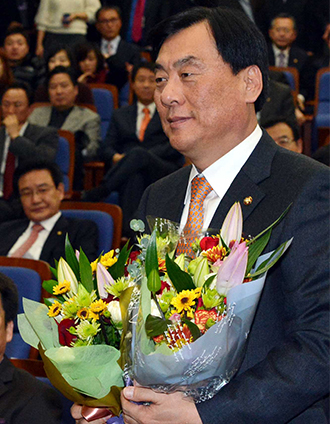 The largest opposition Democratic United Party yesterday elected Representative Park Ki-choon as its new floor leader to pull the party together in the aftermath of its defeat in the presidential election.

The three-term lawmaker won 63 votes in the runoff against Representative Shin Geh-ryoon. Of the party’s 127 lawmakers, 124 attended the voting, which took place at the National Assembly yesterday morning. Shin received 58 votes, and three lawmakers abstained.

The DUP lawmakers’ decision to elect Park, a 56-year-old lawmaker representing Namyangju B District of Gyeonggi, as their new floor leader displayed the sentiment inside the party that Roh Moo-hyun loyalists should be held accountable for the presidential defeat.

Park is known as a centrist with no ties to the DUP’s mainstream factions and he promoted this part of his background before the vote. Representative Shin, who faced Park in the runoff, is considered to be close to the Roh faction. Park will succeed Representative Park Jie-won, who stepped down from the post last week in the aftermath of the DUP’s defeat in the Dec. 19 presidential election.

As the new floor leader, Park Ki-choon is tasked with regrouping the DUP and creating strategies to vet the members of the new cabinet in the upcoming confirmation hearings.

Although the DUP initially planned to ask the new floor leader to act as its interim head, Park made a pledge that he will focus on his role inside the legislature. Based on the promise, the DUP will select the head of its emergency leadership next month.

Throughout the course of this year, the Roh loyalists have tightened their control over the DUP by winning internal leadership elections.

Han Myeong-sook, former prime minister of the Roh government, served as party chairwoman in January, and Lee Hae-chan succeeded her in June. In September, Moon Jae-in, the closest associate of Roh, won the presidential primary.

The presidential defeat, however, put an end to the Roh loyalists’ dominance as the lawmakers selected Park over Shin as their new floor leader.

Before the voting, Park attacked the Roh loyalists for their high-handed attitude and held them accountable for the presidential defeat. After winning the post, Park reiterated his determination to change the factionalism-ridden operation of the party. “I am going to change the DUP from its core,” Park said in his acceptance speech.

“The DUP must be reborn with the determination that we are creating a new party. I will bring an end to the deeply rooted factionalism and reflect on the presidential election defeat.”

Moon, the defeated presidential candidate, did not participate in the floor leader voting. Moon has kept his lawmaker seat since the presidential campaign. Park served as the deputy floor leader twice in the 18th and 19th National Assembly. After Park Jie-won stepped down, he played the role of acting floor leader of the DUP.

Although his tenure is to end in May, Park is charged with developing strategies inside the legislature for the largest opposition party in the sensitive first months of the new administration. The National Assembly was scheduled to open a voting session yesterday, but the plan was canceled as the ruling and opposition parties continued negotiations on some sensitive issues concerning the budget bill.

Monday is the last day of the year and the deadline for the Assembly to vote on next year’s budget.

The ruling and opposition parties yesterday tentatively agreed on the budget bill, as they narrowed down their differences on reflecting the ruling party’s demand to add 6 trillion won ($5.6 billion) to the budget for President-elect Park to deliver her pledges. The Strategy and Finance Committee yesterday also agreed on taxation rule revisions.