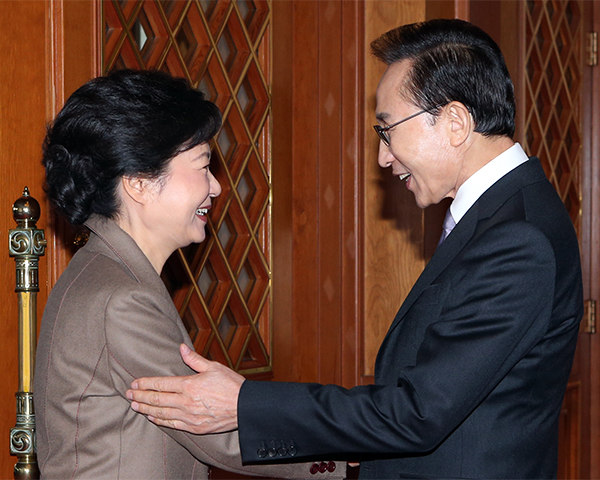 
President Lee Myung-bak and President-elect Park Geun-hye met yesterday to discuss pending issues in state affairs, particularly the looming concerns of another economic crisis and a smooth transition of the administrations.

“The two leaders talked about various topics for the presidential-elect’s smooth takeover of state affairs,” Cho Yoon-sun, spokeswoman for Park, said after the meeting. “The key topic was the livelihood budget.”

Park told Lee that passing the budget to resolve the livelihood issues is the most urgent task and sought his cooperation.

“With the worsening economic conditions, passing the livelihood budget is crucial for keeping the pledges to the people,” Park was quoted as saying.

Park didn’t specifically outline what the livelihood budget would entail. The statutory deadline for the legislature to pass the budget is Dec. 2, but the ruling Saenuri and opposition Democratic United parties were still negotiating as of yesterday.

Cho, however, gave no explanation on how Lee can help with the passage of the livelihood budget at the National Assembly. The meeting began at 3 p.m. at the Blue House, and Park was accompanied by chief secretary Yoo Il-ho and spokeswoman Cho.

Lee was joined by his chief of staff and some senior secretaries.

Their aides, however, left the room for Lee and Park to talk alone, and their one-on-one discussion lasted for about 40 minutes, Cho said.

After Lee congratulated Park once again for her presidential victory, they started the meeting by talking about the slow economy.

“During my stumping around the country, I saw the signs of economic recession and the difficulties of people’s livelihoods,” Park said. “I hope the president will attend to the power supply and demand and other concerns amid the cold weather.”

Lee promised that he will do his best until his last day in office. Park also said she will soon complete the organization of her transition team and operate it calmly and quietly as much as possible.

During the press briefing, Cho described the Lee-Park meeting as extremely amicable.

Blue House officials were tightlipped about the Lee-Park meeting to treat the president-elect with exceptional respect. Lee only told his aides after the meeting that “we had a good talk,” they said.

The last time Lee and Park met was on Sept. 2 after she won the ruling party’s presidential nomination.

It was also the first time in 25 years for an incumbent president to meet with the president-elect without giving up his party affiliation.

Since 1987, all presidents gave up their party affiliations at the end of their terms to give their parties room to maneuver during the campaign.

Earlier in the day, President Lee met with the Blue House press corps for a year-end party and promised efforts to make a smooth transition, adding that an easy transition should happen whether the change is from one party to another or within the same party.

Yesterday’s meeting between Lee and Park was expected to conclude their love-hate relationship over the past five years. Although the two leaders were from the same political party, their relationship had a rocky start as they were rivals in the presidential primary.

Shortly after Lee’s presidential victory, he met with Park on Dec. 29, 2007, but the meeting ended with a confrontation over the nomination process for the legislative elections for April 2008.

While Park said Lee promised during the meeting to start the nomination process quickly, Lee said he wanted it to begin after his presidential inauguration.

Their relationship deteriorated further after Park loyalists suffered a brutal political purge during the nomination process. Tensions reached a new peak in 2009 when the Lee administration was forced to give up its plan to scrap the government relocation to Sejong City due to Park’s protest.

The turning point came when they met on Aug. 21, 2010. Lee promised fairness in managing the 2012 presidential election and efforts to support the ruling party’s victory. Park promised to cooperate with state affairs.

Meanwhile, Park will receive a special envoy from Japan’s new leadership next week.

According to Park’s spokeswoman Cho, a special envoy from Japanese Prime Minister Shinzo Abe will pay a visit to the president-elect on Friday. The meeting will take place amid growing concerns in Korea over the far-right government under Japan’s new leader.