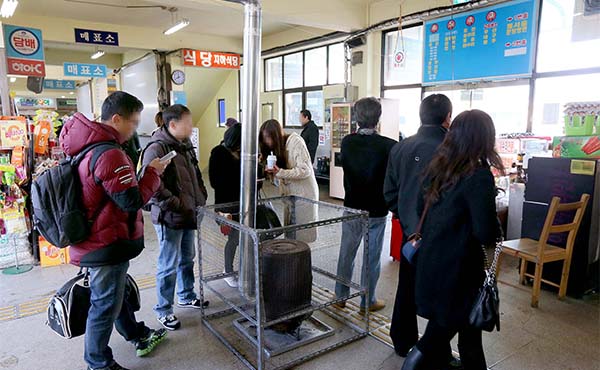 Passengers waiting for a bus at the Uijeongbu Intercity Bus Terminal Tuesday try to stay warm near a charcoal stove. Many bus terminals in the country are outdated and lack proper air-conditioning and heating. By Kim Kyung-bin


At the Uijeongbu Intercity Bus Terminal, Yun Seong-un, a 20-year-old student, flexes his shoulders to shake off the cold. It’s below zero degrees Celsius (32 Fahrenheit) outside - and not much warmer inside. Two stoves try to generate heat.

“I would never have guessed,” Yun shakes his head, “I would see charcoal stoves here.”

Travelers accustomed to high-speed KTX trains feel like Korea is truly a 21st-century country. If you travel by bus and have to use a terminal in one of the smaller cities, you see its past as an underdeveloped nation.

And calls are mounting for an improvement in the country’s bus terminals.

According to the Ministry of Land, Transport and Maritime Affairs and the National Association of Bus Companies, of the total of 337 bus terminals in the country, 255 don’t have online reservation systems, including the terminal in Pyeongchang, which will host the 2018 Winter Olympics.

“I always have to worry about getting a seat whenever I ride a bus without online service available,” said Mr. Lee, a 25-year-old office worker, who was buying a ticket to Icheon, Gyeonggi, at the Uijeongbu terminal.

Over 90 terminals can’t accept credit cards. And the worst are so outdated that they don’t have air-conditioning or heating.

Korea’s train stations are managed by publicly owned Korail, which has a government budget on top of its operating income. In contrast, bus terminals are owned by private businessmen or bus lines and get limited government assistance.

Bus travel is also considered kind of retro and down market. The number of bus passengers has fallen by 58 percent from 530 million users in 1995 to 225 million passengers in 2010.

“We plan to introduce a booking system next year with an additional terminal building,” said an official at the Uijeongbu terminal. “But with scarce government funding, it is too burdensome for private owners to carry out improvements all on their own.”

The Transport Ministry acknowledges that terminals are outdated but says it’s not its problem because they’re not state-owned.

“We are planning to implement deregulation policies for those terminals to find new sources of revenues coupled with facility improvement guidelines,” said Kim Yong-seok, director of the transportation office at the ministry.

“Buses are a fundamental transportation element along with trains,” said researcher Cho Gyu-suk at the Korea Research Institute of Transportation Industries. “And yet, the government does not even know the exact status and conditions of the terminals in the country.”