2012 a year of biennales, state funds

2012 a year of biennales, state funds

Top: Clockwise from left: the “Do Ho Suh: Home Within Home” at Leeum; the Korea Artist Prize at the NMOCA; and the ongoing “Anish Kapoor” at Leeum. All were selected as the best art shows of 2012 in an Art in Culture survey.


The year 2012 marked both a promising and tumultuous period for the Korean art scene. Various exhibitions were extremely popular, reflecting the diversification of the viewers’ tastes, and a flood of biennales kept art halls busy. But a lack of financial support following the massive savings bank scandal has proven to be a difficult obstacle to overcome for private galleries.

Three art exhibitions, excluding biennales and traditional art shows, attracted more than 100,000 viewers: “The Centennial Celebration of Lee In-sung’s Birth” by the National Museum of Contemporary Art (NMOCA), which shed new light on the Korean modern painter Lee (1912-50); “Do Ho Suh: Home Within Home” at Leeum, the Samsung Museum of Art, which was the solo show of the renowned installation artist Suh; and “Finn Juhl: Scandinavian Furniture” at the Daelim Museum, which displayed the Danish architect and furniture designer’s works.

The popularity of these exhibits highlights how Korean viewers no longer only rush to the exhibitions of European Impressionists and modern masters, as they have done in recent years.

Among the three, the Lee In-sung retrospective and Do Ho Suh solo show were included in the 2012 list of the best 11 fine-art exhibitions designated by the Art in Culture magazine, based on a survey of 32 art experts. 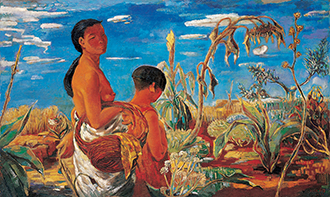 “The Centennial Celebration of Lee In-sung’s Birth” at the Deoksu Palace branch of the NMOCA was selected as one of the best art shows of the year. Provided by the museums

According to the survey, the best of the best was the 2012 Korea Artist Prize Exhibition at the NMOCA. This show featured three contemporary artists and a duo nominated for the first annual Korea Artist Prize, co-sponsored by the NMOCA and the SBS Foundation,

Other exhibitions on the list include the ongoing large-scale solo show of the Indian-born British sculptor Anish Kapoor at Leeum and the “Deoksugung Project,” in which contemporary artists were invited to install their works in the historic buildings and gardens of Deoksu Palace in central Seoul with their own renderings of the palace.

Eight of the “Best 11” exhibitions were held by the NMOCA or Leeum.

“The survey shows that the curating quality of the state-run museums has improved sharply, while commercial galleries have been relatively weak this year in the aftermath of the economic slump,” the monthly magazine commented.

Meanwhile, the Korea Artist Prize was awarded to the duo - Moon Kyung-won and Jeon Joon-ho - for their collaboration project titled “Voice of Metanoia,” which consists of various genres of art, including video, installation and performance.

Experts say that Moon and Jeon, both 43 years old, are the star artists of 2012. They have been collaborating the past few years on the question, “What can art do for society?”

They also won the Noon Award at the ninth Gwangju Biennnale for a two-channel short film, “El Fin Del Mundo” (“The End of the World”), which is part of the “News From Nowhere” project.

Including the Gwangju Biennale, four biennales were held in major cities of Korea simultaneously in autumn.