Counting down to 2013 - Gangnam style

Counting down to 2013 - Gangnam style 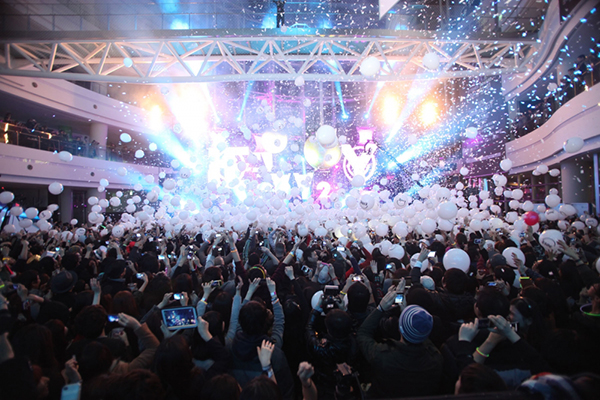 “Countdown Seoul” festival that is held on New Year’s Eve will feature a stacked lineup of local hip-hop artists. The concerts will be held at Times Square in Yeongdeungpo, western Seoul.Provided by the organizer


Counting down at Bosingak in central Seoul for the annual bell ringing ceremony or going up to Namsan Tower to witness the first sunrise of 2013 is too cliche of a way to kick off the New Year.

Why not add some beats and dancing to the traditional midnight countdown?

Attending indoor music festivals has been the new trend among partygoers in their 20s and 30s - and it’s certainly a warmer option with less layers of clothing.

Hip-hop fans can head to Times Square in Yeongdeungpo, western Seoul, for the “Countdown Seoul 2013” festival, which celebrates its third year running. From 11 p.m. to 4 a.m. tomorrow morning the shopping center will turn into a hip-hop club.

Ten local artists including the ’90s boy band DJ DOC, Hyungdon & Daejun, Dynamic Duo, Garion and 45rpm will stage a concert and will make sure you don’t miss the countdown from too much partying. The invited hip-hop artists are known for their “crazy and electric concerts.” The festival will also have its signature event of flying hundreds of balloons as soon as the clock strikes midnight. Tickets cost 55,000 won ($51.30) or 66,000 won at the door.

There’s also a New Year’s Eve event at the Sheraton Grande Walkerhill Hotel in eastern Seoul, but it’s not one of those luxurious events where you have to spend millions of won and toast with expensive champagne.

Thirty-one electronic music artists will be divided into two stages to allow audience members to go back and forth between the two halls from 9 p.m. to dawn. The Final Stage will hold concerts of electronic bands including Idiotape, Netsky and DEAD END while the Angel Stage will hold concerts by Simon D, Verbal Jint, 360 Sounds and Soulscape. Tickets cost 66,000 won.

Indie rock fans have been enjoying the “Countdown Fantasy” festival since Saturday at the Mapo Arts Center. Tonight is the last day of the festival and will invite 12 indie bands including Daybreak, Solutions and Rocket Diary. The concert series will run from 5 p.m. to 1:30 a.m. Tickets cost 55,000 and 60,000 won at the door.

If standing and jumping up and down among hundreds of people is not your thing, you can try a quieter way to count down to the new year with live music.

From left: The Seoul Arts Center will hold its 19th New Year’s Eve concert at 9:30 p.m. followed by its signature fireworks display and wish balloons; Universal Ballet’s “The Nutcracker” will be held at 10 p.m. at the Universal Arts Center with a special midnight celebration; pianist Jung Jae-hyung is part of the lineup for the New Year’s Eve concert at the Sejong Center for the Performing Arts tonight at 6:30 p.m. Provided by the organizers


The “National Theater of Korea’s New Year’s Eve Concert 2012 starts at 10 p.m. Towards midnight, the audience will be taken outdoors to listen to Korean percussion group Deulsori’s performance to signal the New Year, followed by spectacular fireworks. Tickets range from 20,000 won to 100,000 won.

At the Sejong Center for the Performing Arts in central Seoul, top artists such as Lee So-ra, Jung Jae-hyung, Lucid Paul and Vibe will stage end-of-the-year concert “Thank You 2012” at 6:30 p.m., followed by another concert to celebrate the coming of the New Year, “Heart Flutter 2013,” at 10:30 p.m.

According to the organizers, the artists, who are known for their outstanding singing abilities, will take the audience on a journey, calmly reflecting their past year while welcoming the coming of 2013 through harmonious duets and tunes. Tickets range from 50,000 won to 130,000 won.

The Seoul Arts Center has been holding a New Year’s concert for 18 years, which is followed by its signature event of fireworks and make-a-wish balloons.

After watching the classical concert that starts at 9:30 p.m., the audience members go outside to watch fireworks. Then they each fly a balloon wishing for a good new year. Although tickets were sold out in just two weeks for this year’s event, you can still witness the spectacular fireworks nearby.

At 10 p.m. tonight, they’ll perform Tchaikovsky’s “The Nutcracker” and will have a special celebration at midnight. Tickets range from 30,000 won to 200,000 won.