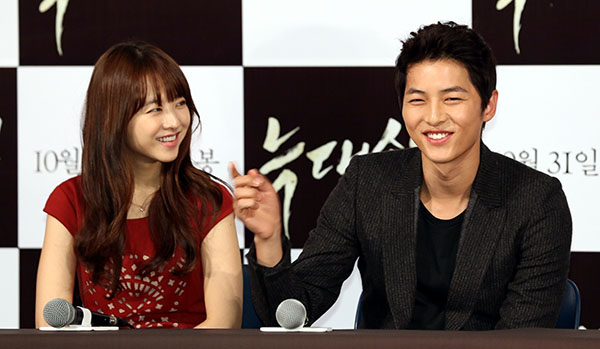 
Although it would be a dream come true for most actresses to work with Song Joong-ki, Park Bo-young claimed it was more stressful than anything else.

During a radio show on SBS’s “Cult 2 Show” that aired on Thursday, the 22-year-old actress from this year’s hit movie “A Werewolf Boy” dished the dirt on the perils of working with Song.

“He had the most perfect skin,” said Park, going on to say she feared her co-star would outshine her with his porcelain face.

Park said she asked Song for skin care tips and he told her his secret: eating an apple a day.

“A Werewolf Boy” has been seen by seven million people since opening on Oct. 31, making it the most-watched Korean film in its genre ever.

Earlier this month, the distributor brought out an alternate ending version to thank fans for their support.

The film, along with the drama “Innocent Man,” helped Song become one of the hottest entertainers of 2012. KBS named him Male Celebrity of the Year.