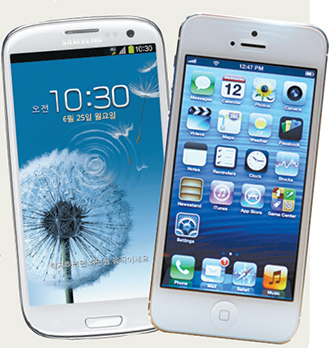 The multipronged litigation battle between Apple and Samsung continued from 2011 through 2012.

The world’s two leading smartphone makers have sued each other over a range of patents in nine countries, including the U.K., Italy, Germany and France as well as in the U.S. and Korea.

At first the tide seemed to favor Samsung as a Seoul court on Aug. 24 ruled that Apple infringed two of five 3GPP technologies and therefore had to pay Samsung Electronics 60 million won ($55,985). The Korean tech giant expected the U.S. court would also rule in its favor but was surprised to find a jury in San Jose, California, favored Apple and ordered Samsung to hand over $1 billion for infringing its patents.

This was considered a huge victory for the U.S. smartphone maker.

However, the court has yet to make its final decision, and Samsung is making the most of the interlude by questioning the credibility of some of the jurors. Meanwhile, Apple is hoping to add an additional $500 million to the judgment on the grounds that Samsung intentionally violated its patent rights.

Outside of the courts, Samsung is thriving. After becoming the world’s leading smartphone maker by number of handsets sold in 2011, in the third quarter of this year it became the world’s top mobile phone manufacturer.