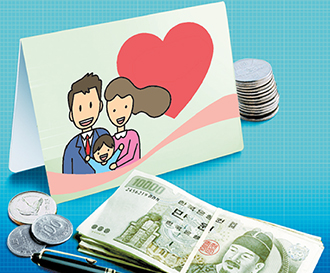 All she needs is for her husband to transfer the living expenses to her newly opened account. Lee gets an exemption on several banking service commissions while receiving coupons that can be used at different retailers.

“Since the bank account exempts commissions and offers numerous coupons, I hope to manage our living expenses more strictly.”

While the recession is eating into their profits, banks are setting their targets on homemakers.

Homemakers have been major targets in the retail industry. However, in the financial market, they were deemed insignificant as there are no stable incomes rolling in. Until now, most of the financial companies targeted young single women who are more aggressive in their spending and investment habits. But that is changing quickly.

KB Kookmin Bank recently opened an account called Ahnaesarang, which translates to “loving wife.” The account is based on a theory of Seoul National University Prof. Kim Nan-do. In one of his publications, the professor said homemakers should also receive a wage just like any working employee as their labor at home should be recognized as an economic activity.

Those who open the account will receive exemption on several banking services, including withdrawing cash via ATMs or transferring money from or to non-KB Kookmin Bank accounts.

Additionally, in every quarter the account holder will get discount coupons that they can use at E-Mart or AmorePacific stores.

Shinhan Bank is also jumping in the ring as the bank has already decided to launch a bank account exclusively for homemakers, which will include commission payment exemptions as well as discounts on education spending.

Hana Bank and Woori Bank, which until now have only offered special bank accounts for single women, are also working on developing homemaker bank accounts.

Banks are not the only financial firms that are eyeing homemakers. Credit card companies and brokerage firms are trying to lure this group in through numerous events including opera shows and holding classes on makeup and tea brewing.

“Developing financial products that offer higher interest rates just because the customer is a woman is no longer meaningful,” said Si Jin-woo, head of the deposit department at KB Kookmin Bank.

“We have to develop asset management services or financial products that are exclusively designed to meet the specified groups whether it’s a homemaker or a working mom.”

The banks are targeting homemakers as their position within the family has increased compared to the past, while they are much more loyal as customers compared to their spouses.

There’s a saying that the wife makes the decision in the family on where they plan to spend money.

In a survey by Shinhan Bank on its 30 employees specializing on female customers, 44 percent of the women who visit the bank are homemakers. Additionally, 61 percent are in charge of managing the financial transactions of their husband and children.

“The economic power of homemakers is getting stronger within the family as their influence in the family has grown,” said Wie Yeon-sang, head of the strategic market department at Shinhan Bank.

“The homemakers are conservative when it comes to investment since their dependency on their husband’s salary is high,” Wie added. “For this reason they tend to invest heavily in bank products.”