Even with Wade back, Bucks too much for Heat

Even with Wade back, Bucks too much for Heat 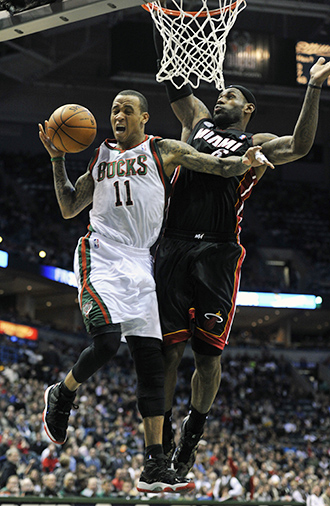 Milwaukee Bucks’ Monta Ellis (11) drives to the basket against Miami Heat’s LeBron James during the second half of their NBA game on Saturday. The Bucks won 104-85. [AP/YONHAP]

Brandon Jennings scored 25 points and Mike Dunleavy had 13 of his 18 in the fourth quarter as the Milwaukee Bucks beat the Heat 104-85 on Saturday night.

Wade was back after serving a one-game suspension for flailing his leg and making contact with guard Ramon Sessions’ groin during the Heat’s 105-92 victory over Charlotte on Wednesday. Wade sat out Miami’s 109-99 loss to Detroit on Friday night, which snapped the Heat’s six-game winning streak.

“Obviously, the last 48 hours has not gone the way we wanted it to,” Miami coach Erik Spoelstra said. “We don’t want to make any excuses about it. Milwaukee kicked our butt. They were the better team tonight. We will gather ourselves, get to Orlando and start to work on it.”

Wade had 24 points on 10-of-19 shooting, four assists, six rebounds and three turnovers. LeBron James scored 26 as Miami failed to reach 100 points for just the third time in 28 games.

“It’s going to take time,” Wade said. “We go through this every year. It’s a part of the journey. You have to have these moments throughout the season. To win later in the year, you have something to pull from.”

Wade said the Heat would love to be undefeated on the road, but that isn’t going to happen.

“In the bigger picture, you have to go through these tough moments and have to figure it out as a team,” he said. “That’s what we’re doing right now.”

Luc Richard Mbah a Moute scored 19 points for the Bucks, and Larry Sanders had 16 points, 11 rebounds and four blocks. Monta Ellis added 14 points as Milwaukee avenged a 113-106 overtime loss to the Heat in Miami on Nov. 21.

Dunleavy also had nine rebounds, six assists and three steals for the Bucks, who outscored Miami 35-14 in the fourth.

After Jennings hit a 3-pointer, Miami called a time-out and removed Wade, James and Chris Bosh with the Bucks ahead 100-79 with 3:13 to play. That was Milwaukee’s biggest lead, and it didn’t slip below 17 the rest of the way.

It got chippy late in the game with Milwaukee pulling away.

After Wade turned the ball over, Jennings picked it up and raced down the court. Mario Chalmers, trailing the play, caught up with Jennings and then slowed him down by wrapping his right arm around Jennings’ neck. As momentum carried Chalmers toward the baseline, Jennings followed after him, glaring all the way.

Chalmers was called for a flagrant foul. Jennings made both free throws and Milwaukee retained the ball. Moments later, Mbah a Moute scored and the Bucks led 92-76.

Miami’s defense limited the Bucks’ shooting percentage, but turnovers were too much to overcome.

“They shot 40 percent from the floor, but we turned the ball over 20-plus times,” James said.