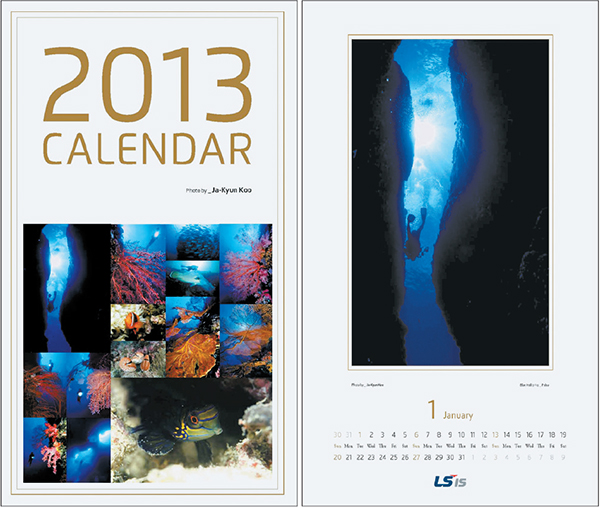 Photos of underwater scenery taken in the waters off the Pacific Ocean island of Palau illustrate a calendar put together by Ku Ja-kyun, vice chairman of LS Industrial System. This year marks the third edition of the calendar that Koo, a diving enthusiast, has made using his own pictures. Provided by the company


Rather than simply sending a new year’s greeting card, more CEOs and senior executives are making personalized calendars this year using their own photos to send to business contacts and colleagues.

They say the gifts double as a medium for sharing their business philosophies or personal interests with recipients.

Vice Chairman Koo Ja-kyun of LSIS, an enthusiastic scuba diver, hands out calendars full of photos of underwater scenery every year. Koo, a licensed dive instructor and president of the Seoul Underwater Association, can hold his breath underwater for 3 minutes and 40 seconds. This is the third year he has published a calendar using his own photos for his business partners and to close acquaintances.

Koo chooses exotic locations like the Philippines or Palau, an island nation in the Pacific, and takes 900 photos each year. He selects the best 14 for the calendar.

“When I go deep underwater I realize how small I am in relation to the vast expanse of nature,” said Koo in a letter attached to this year’s calendar.

“To thank everyone who is precious to me, I’ve put my own philosophy into the viewfinder [of a camera] and made a calendar out of photos.”

Sim Jae-seol, president of LS Mtron, which manufactures industrial machinery and components, has also been printing yearly calendars since 2005.

Park Yong-Sung, chairman of Doosan Heavy Industries and president of the Korean Olympic Committee, has made his fifth yearly calendar of landscape photos and shots of everyday life for 2013. His first dates back to 2005.

“He likes taking photos of his daily life, and wild flowers are also one of his pet subjects,” said an employee at the company. He carries camera with him whenever he leaves the city, the staffer added.

Korean Air Chairman Cho Yang-ho has made personalized calendars for over a decade and is well known in the industry for giving them as a gift. When his passion for photography was publicly known around the end of 2001, he printed his first calendar and handed it out to CEOs at global companies, foreign diplomats and family friends.

“He believes this can serve as a foundation to create a better understanding with people,” said a staffer at the airline.