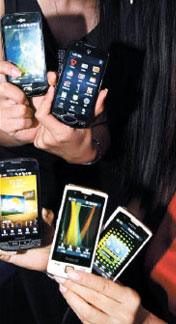 The service, available from today, allows up to five LTE devices, such as smartphones and tablet PCs, to share a single data plan.

All three mobile carriers now have established similar services, with KT and LG U+ rolling them out on Dec. 12.

“There are more consumers using smartphones in conjunction with other mobile gadgets as the market is being reformed with the rise of LTE,” SK Telecom said in a release. “For greater convenience in terms of how they consume data, we have upgraded our plans and services.”

If their current smartphone plans don’t offer enough data to cover all their needs, they can add an extra gigabyte for 24,000 won, or 2.5 gigabytes for 35,000 won, a month. The prices can be discounted if they sign a two-year contract, but they could be subject to penalties if they terminate early, SK said.

The carrier added that it will set limits on extra data usage to cap potential surcharges on subscribers’ bills, adding that it won’t allow them to spend more than an additional 18,000 won a month.

The telecommunications giant also said it will offer a combined data plan for a bundle of electronic gadgets including tablets and smart cameras but excluding smartphones. Previously, each device had a separate plan. However, consumers can now choose from three options: one, two and a half, or five gigabytes.

SK said it has also reduced the cost of using its Wi-Fi services, for example for users of other networks who find themselves out of range for the day. Consumers now have to pay 2,000 won for the privilege each day instead of 3,000 won.