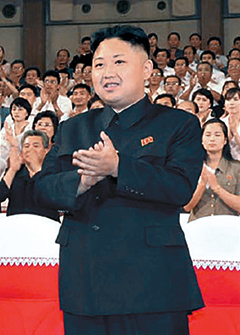 The biggest news story of the year in the security realm was the solidification of the rule of Kim Jong-un in North Korea.

After Kim Jong-il died of an unexpected heart attack on Dec. 17, 2011, the world watched to see if his youngest son, not even 30 years old, could successfully pull off a third generation dynastic succession. South Korea held its breath in case the young scion felt an attack like the sinking of the Cheonan warship or the shelling of Yeonpyeong Island in 2010 was the kind of glue his regime needed.

Jong-un managed to avoid a coup from his military or public protests. The biggest surprise was his purge of his father’s inner circle - including some of his fellow pall bearers at Kim Jong-il’s state funeral.

The most unexpected fall was that of Ri Yong-ho, former army chief of staff. The state media said in July that Ri stepped down for “personal reasons,” but it was clear that his demise was the work of Jong-un and his desire to shift power from the military to the ruling Workers’ Party. Kim also reportedly intensified border security to foil defections and surveillance on dissidents.

The very public failure in April of a long range missile, which Pyongyang said was to send a satellite into space, was made up for in December when the rocket succeeded in reaching Earth’s orbit (although the satellite appears to be a dud). That has allowed Kim Jong-un to say he’s followed through on his father’s promise to make North Korea a powerful nation by 2012.

A further promise to make it prosperous was finessed. But the regime sacrificed a deal for U.S. food aid when it tested the rocket in April. No further diplomatic progress was made on denuclearization this year.

Aside from the leader himself, the other rising star this year was an attractive former singer who was photographed with Jong-un at several events before it was revealed she was the new first lady of North Korea, Ri Sol-ju.