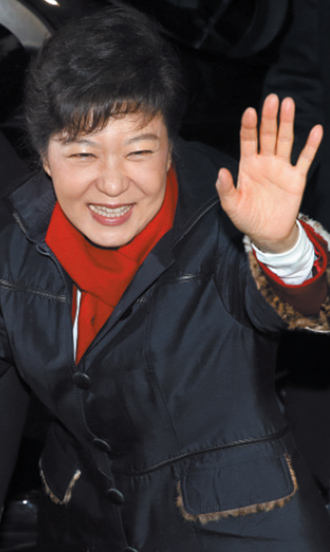 In a historic day for the country, Korea elected its first woman president, Park Geun-hye, on Dec. 19.

Park, of the ruling Saenuri Party, defeated Moon Jae-in of the opposition Democratic United Party in a tight race.

With the victory, the eldest daughter of the late strongman Park Chung Hee will be back in the Blue House where she spent her teenage years and also served as acting first lady after her mother’s assassination in 1974.

Regionalism was still evident as Park largely won the Gyeongsang region while Moon prevailed in Jeolla, but in the capital region of Seoul, Incheon and Gyeonggi, the contest was neck-and-neck.

During this year’s presidential election, the public demands for “new politics” became a key issue.

Ahn Cheol-soo, a software tycoon-turned-professor, emerged as a political star as young voters frustrated with business-as-usual politics showed him their support.

Ahn declared his presidential bid on Sept. 19, but quit the race on Nov. 23 after conceding the liberal nomination to Moon.

Ahn later endorsed Moon, but his rather lukewarm support was not enough to help propel the DUP candidate to victory.

The Internet podcast “Naneun Ggomsuda,” or “I’m a Petty-Minded Creep,” focused its political satire on President Lee Myung-bak and the ruling party. The show was downloaded more than any other podcast in Korea.

Vulgar remarks made by Kim Yong-min, one of the hosts, triggered a backlash and eventually benefited the Saenuri Party in the April general election.