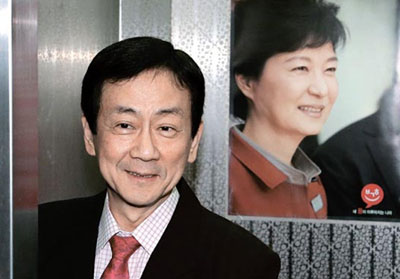 After facing criticism for her transition team appointments, President-elect Park Geun-hye is considering launching a human resources team under her Secretary’s Office to help decide on new cabinet members and other high-ranking government posts, a close aide told the JoongAng Ilbo.

“If we fail in making cabinet appointments, it will deal a serious blow to Park in the early stages of the administration,” the aide said yesterday. “So there is a growing belief that we need this kind of human resources oversight committee.”

Park is expected to seek cooperation with the National Tax Service, the prosecution or the police to ensure the vetting of figures is conducted thoroughly, and to determine whether candidates have served their mandatory military service, evaded taxes or have a criminal record.

“The transition team will not discuss all matters concerning the new administration,” Chin told reporters at a luncheon meeting yesterday. “It will not monitor the close confidantes of Park or her relatives, or deal with cabinet appointments.”

Park is taking the extra precautions after she faced a string of stinging criticism over newly minted members of her transition team in relation to their political positions or suspected ties to bribery cases.

One of the most controversial figures was Yoon Chang-jung, a former conservative columnist who has been appointed the team’s chief spokesman. On his home page, Yoon has called supporters of Moon Jae-in, the failed presidential candidate of the Democratic United Party, “political prostitutes” and “anti-ROK people.” ROK stands for the Republic Of Korea, the country’s official name.

Moreover, Ha Ji-won, a former Seoul city government councilor and ruling Saenuri Party member who was named to join the transition team’s special subcommittee for youth, was indicted in 2008 on suspicion of receiving an envelope stuffed with cash from a former chairman of the city council ahead of the general elections in April of that year.

Another black cloud was cast over Youn Sang-kyu, CEO of Neowiz Games, who was also tapped to join the special subcommittee. The Fair Trade Commission said Neowiz owes one of its subcontractors about 10.5 million won ($9,800) but appears to be refusing to pay up.

“We demand Park withdraw the appointment of Yoon, who has a foul mouth, Ha, who took bribes, and Youn, who goes against the grain of economic democratization,” DUP spokesman Park Yong-jin said during a briefing. “These problems all stem from Park’s unilateral and secretive way of conducting appointments.”