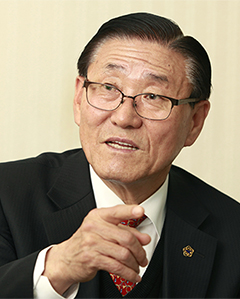 Hwang Duk-ho, the current head of the Committee for the Five northern Korea Provinces, explains how wartime refugees from North Korea have operated a shadow government in central Seoul, during a recent interview with the Korea JoongAng Daily. By Park Sang-moon

A shadow government for North Korea has been operating in the South since 1949, waiting for an unexpected reunification that never came.

Its members, wartime refugees from the North, are old now and don’t know if they’ll ever return to their homes. So they’re coming together with more recent defectors from the North, helping them adjust to life in the South - and asking them to take over their roles if reunification ever happens.

“One of the common things between wartime refugees and the defectors is that if they can, they all want to return to their hometowns,” Hwang Duk-ho, the current head of the Committee for the Five northern Korea Provinces, told the Korea JoongAng Daily in an interview at his office in Gugi-dong, central Seoul. “But the refugees are dying, and their children, born in the South, don’t want to go to their parents’ hometowns in the North.

“But if the two Koreas are unified, some people must go to the North and work to redevelop old towns and cities there,” he continued. “And we think the recent defectors are the ones to do the job because they are still young and know more about their hometowns than anyone else.”

The Committee for the Five northern Korea Provinces was founded in 1949 to govern North Korean territory in the case of rapid reunification. The first South Korean president, Syngman Rhee, appointed interim heads of what were then five North Korean provincial governments.

“Under the South Korean Constitution, North Korean territory is considered part of the Republic of Korea, which hasn’t been recaptured since the 1950-53 Korean War,” Hwang said. “So the South Korean government has a duty to keep governing the region as part of our territory and founded an interim administration.”

North Korean residents in a village near the inter-Korean border work to shovel snow yesterday in a photo taken from the Odusan Unification Observatory in Paju, Gyeonggi. An armistice treaty, which was concluded in 1953 after the three-year Korean War, has maintained the division of the Korean Peninsula for the last 60 years. [YONHAP]


For the next 60 years, Seoul maintained the committee, run by the Ministry of Public Administration and Security and also used as a support center for wartime refugees, who were mostly poor.

“If the two Koreas are reunified, we will immediately go to North Korea and govern the whole region until a new administrative system is launched,” Hwang said. Hwang is head of the committee and also the interim governor of South Hamgyong Province.

The committee is composed of five provincial offices, city governments, and county offices. The governors of the five provincial offices are all vice-ministerial-level government officials, appointed by the Korean president and replaced annually. Most of the other officials are appointed by the governors. Except for the five governors, no salaries are paid, although they receive stipends of around 300,000 won ($280) a month.

“All of the officials are wartime refugees who came from the North before or after the Korean War or children of refugees born in the South,” Hwang said. “There are about 200 officials in each provincial government with a similar organization of Southern provincial offices.”

Hwang was born in Hungnam, South Hamgyong Province. His whole family came to the South in 1946, when North Korean founder Kim Il Sung and some former anti-Japanese guerillas created a new governing body supported by the Soviet Union.

“After the end of World War II, lots of communists returned to the Northern regions and executed wealthy people, intellectuals, landowners and Christians,” he said. “They extorted their properties in the name of communism.

“My father was a pastor, so my family had to flee from the communists in the North,” he said. “We took a wooden boat and arrived on Jeju Island. You would never understand how painful the journey of a refugee was.”

According to Statistics Korea, the number of Northern refugees flocking to the South was 889,130 in 1952.

“Most of Northern refugees settled down in the so-called Haebangchon, or Liberation Area, a shantytown in Yongsan District, central Seoul, or areas near Namdaemun Market,” he said. “They also lived in some houses in Hoehyun-dong, central Seoul, where Japanese officials used to live during colonization.”

“Basically, we have played a role to support the wartime refugees,” Hwang said. One of the main duties of the committee is to convene a large annual event bringing the refugees together.

“Once a year, we hold a full-scale event at a sports stadium in Jamsil, southern Seoul,” Hwang said. “Roughly 10,000 people come to the gathering every year, voluntarily, from all regions nationwide. Can you, the younger generation, understand why they come? It’s because they desperately miss their hometowns in the North and want to meet with people who came from the same hometowns. When they meet their friends, they welcome each other with the words, ‘Are you still alive?’?”

The refugees are rabidly anti-communist and aren’t too fond of Korea’s progressives either. When the Democratic United Party’s presidential candidate Moon Jae-in paid a visit to the group’s annual event in Yongsan on Oct. 15, several committee members threw a water bottle at him and shouted, “Go home, red!”

“For the Northern refugees,” Hwang explained, “the most dreadful idea is for the communists to occupy this country once again. We can never accept a series of policies by the opposition parties, such as denying the de facto maritime border, the Northern Limit Line, or forming a joint fishery area between the two Koreas. That is the equivalent of allowing the North to invade the South!”

The new initiative of the aging refugees is to link hands with the newer defectors from the North. For the first time since the committee was founded in 1949, it set up a special team to provide services for recent North Korean defectors such as a matching program between wartime refugees and recent border crossers.

“We have a lot to say to the defectors,” Hwang said. “So we launched a one-on-one matching program between wartime refugees and the defectors, especially between people who came from the same regions, so that they can have dinner together and share memories about their hometowns. The early refugees also offer advice on how to settle down in the South.”

On the first floor of the committee’s headquarters in Gugi-dong, a new office for North Korean defectors has been opened. Starting from next year, the committee will start to operate a full-fledged online management system for all people from North Korea.

“Southern society should help the 25,000 Northern defectors settled here so that they can work later in the North,” he said. “Otherwise, who will be able to handle the influx of poor people from the North after unification?”