Ryu holds firm to get contract with Dodgers

Ryu holds firm to get contract with Dodgers 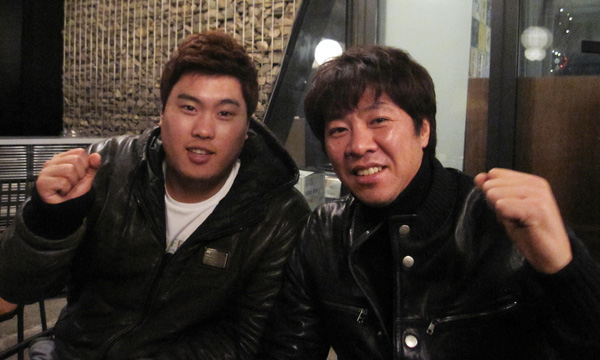 Two Korean pitchers bound for the Major League, Ryu Hyun-jin, left, and Lim Chang-yong pose during an interview with the Ilgan Sports, an affiliate of the JoongAng Ilbo, in a Seoul restaurant last Thursday. By Kim Sik


Ryu Hyun-jin stood his ground until the last moment that he would not accept a Minor League contract option before the Los Angeles Dodgers signed the Korean pitcher, according to a recent interview with the Ilgan Sports.

The Dodgers agreed to his terms with 20 seconds left before the deadline, Ryu said.

The $36 million, six-year deal the 25-year-old left-hander reached in Los Angeles on Dec. 9 is the third-most lucrative deal a foreign player has ever landed in the Major League through a posting system, which many local baseball fans credited to the negotiation skills of his agent Scott Boras.

However, the audacity of Ryu, whose steel nerve on the mound has long appealed to foreign scouts, also appears to have played a role.

“I held out until 30 seconds were left before the deadline for my contract,” the former Hanwha Eagles pitcher said in the interview in Seoul.

“They wanted to insert a minor league option in it, and I said ‘I won’t sign the contract. I will come back to Hanwha.’

“After I said that, I got nervous on the inside [that the Dodgers would walk out of the talks], but with 20 seconds left, they did as I wanted.

“My lawyer wrapped up the paperwork, and when he finished it by faxing (the documents), he said to me ‘there is one second left.’”

Ryu, set to leave for the U.S. early this month for training with the Dodgers, is the first Korean to move directly from the Korea Baseball Organization league to the Major League and Korean fans have high expectations that he will surpass many of his fellow countrymen who began their Major League careers with promising prospects, but without establishing their records first. Ryu himself set the goal of breaking the most career wins in the Major League by an Asian pitcher, held by his former Eagles teammate Park Chan-ho, who won 124 MLB games.

With a career 2.80 ERA, the Incheon native remains the first and only player to win both the Most Valuable Player award and rookie of the year in the same year which he won with 18 victories in 2006.

In the interview, Ryu said that he wants his debut in the MLB to shine as much as his KBO debut.

Lim Chang-yong, who signed a deal with the Chicago Cubs last month, was also invited to the interview, where the 36-year-old pitcher congratulated Ryu for doing what he couldn’t do 10 years ago.

Lim tried the posting system, where players can play in the U.S. two years before a player becomes a free agent, when he was a key reliever for the Samsung Lions, but he decided to stay after the Major League teams bid $650,000 at most to get an exclusive negotiation with him.

“I am happy for you to be able to play in the Major League,” Lim said to Ryu during the interview.

“But, my story [10 years ago] popped up continuously in the media during your posting negotiation and it is still embarrassing to me,” Lim said, smiling.

Days after Ryu’s deal with the Dodgers, Lim agreed with the Cubs on a contract that would give him a chance to play in the Major League when he recovers from Tommy John surgery, which is expected to be as early as August.

The split contract guarantees him a minimum $100,000, a small amount compared to Ryu’s, but Lim said that he is happy to be able to achieve a dream, which he said he has never given up.