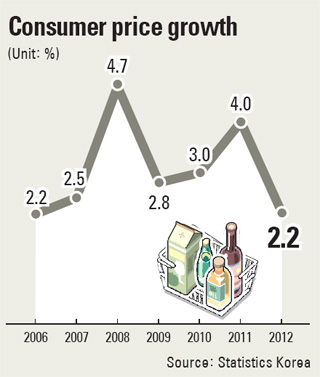 Consumer prices grew at the slowest pace in four months in December, indicating that the country is keeping inflationary pressure under control, a government report showed yesterday.

The country’s consumer prices index rose 1.4 percent last month from a year earlier, slowing from a 1.6 percent on-year gain in the previous month, according to the report by Statistics Korea. From November, it moved up 0.2 percent.

The on-year figure marked the slowest growth since August when the index increased 1.2 percent.

The core inflation, which excludes volatile oil and food prices, rose 1.2 percent on-year last month. This represented a deceleration from a 1.3 percent increase in November.

Inflation has been easing over the past year after it remained relatively high at around 4 percent throughout 2011 as the government made efforts to stabilize prices of food and other products that could have a direct impact on the livelihoods of ordinary people.

Inflationary pressure, however, may rise in the months to come as prices of food and public services are set to increase after the Dec. 19 presidential election.

The government earlier warned that it will keep tabs on food makers and public service providers, which might be seeking to take advantage of instances of lax market surveillance during the change of government until the new administration starts to get settled from February.