Electronic boards at Korea Exchange Bank in central Seoul show the Korean won-U.S. dollar exchange rate ringing out the year at 1,070.60 won, while the Kospi rose 9.7 points on Friday, the last day of the stock and currency market trade in 2012. [NEWSIS]


The won’s appreciation against the dollar typically excites fears of weaker exports and a threat to Korea’s economy.

However, exporters escaped relatively unscathed last year despite the won rising 7.6 percent against the greenback, the biggest jump among Asia’s 11 most-traded currencies, to end the year on a record high. It appreciated 1.6 on Friday, the last trading day of 2012, to close at 1,070.6.

Its upward momentum is expected to continue this year as signs of a pickup in the local economy look set to keep luring overseas funds and the dollar maintains its slide. 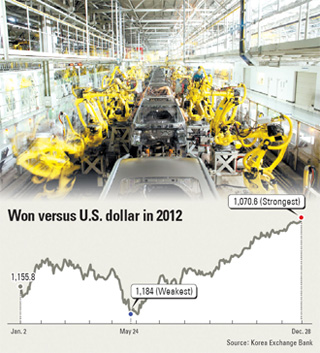 Despite some news headlines still warning against a stronger won, local corporations - currency-sensitive exporters, in particular - do not appear to be on high alert. In recent years, they say they have been developing a stronger tolerance to currency risks.

Local automakers, which are considered high risk as they rely heavily on foreign sales, have begun producing more vehicles overseas instead of shipping them from Korea to minimize the impact of negative foreign-exchange fluctuations. With top carmaker Hyundai Motor’s recent completion of a plant in Brazil and its affiliate Kia Motors’ following suit in China, the group can now produce more vehicles abroad than at home for the first time in their history.

As of last year, Korea’s two top carmakers had a combined annual production capacity of 3.51 million units domestically and 3.69 million units abroad. Of the latter, 1.44 million were made in China. In the first 11 months of 2012, Hyundai sold 3.4 million vehicles overseas, but only 1.13 million of these were built in Korea.

“We are not overly concerned about the currency rate as we have been preparing for various possible scenarios,” said a Hyundai spokesman. Both automakers have been hedging currency risks on their exports in recent years by diversifying their settlement currencies to minimize their exposure to currency volatility.

“The impact of foreign exchange changes on Hyundai and Kia will be limited as they have localized production in numerous countries,” said Chang Moon-su, a researcher at Eugene Investment & Securities. “Since 2008, when the won has been climbing against the dollar, they have learned how to cope with such aggravated currency situations.”

Others point to the potential threat of the weakening Japanese yen. The yen dropped to its lowest point against the Korean currency since August 2010 on Friday amid speculation that the Bank of Japan will inject more cash into its economy. A weaker yen makes Japanese cars more competitive overseas.

Ko Tae-bong, an analyst with Hi Investment & Securities, said Korea’s carmakers need to focus on more than currency changes alone. “They should concern themselves more with car prices, the effect of launching new models on the market and giving consumers incentives to boost sales,” he said.

Shipbuilders, which also depend heavily on exports for profits, now have foreign currencies constitute up to 80 percent of their currency reserves to hedge against exchange risks.

Morgan Stanley, a U.S. investment bank, said in its report on Nov. 20 that the negative impact of the Korean won’s rise against the dollar on local exporters will be “limited.” Concern about the stronger won eating away domestic firms’ profitability seems excessive given that the influence of such currency moves have been “hugely mitigated” in recent years, the report said. Exports grew for the first time in four months in October, lending credibility to claims that the strengthening won has not put a serious damper on the competitiveness of the nation’s goods overseas, the report added. On-year growth stood at 1.2 percent bolstered by shipments to China and Association of Southeast Asian Nation (Asean) members. Exports now make up almost 50 percent of Korea’s GDP, up from 30 percent in 2008.

Yoo Sang-ho, CEO of Korea Investment & Securities, said in a recent contribution to the JoongAng Ilbo that the won’s recent rise against the dollar is ”evidence that the Korean economy’s fundamentals are now significantly stronger than before.” However, he said a contraction in global consumption remains a distinct possibility in 2013 and this would take its toll on products made in Korea.

Kim Sung-no, a strategist with KB Investment & Securities, does not expect the won to jump much this year, but rather expects more of a modest ascents. If it were to grow as steeply as it did in the years from 2004 until 2007 - before the global recession kicked in - corporate profitability would take a hit, but this is an “extreme scenario,” he said, adding that “Korean companies should see stable profits regardless” this year.

While Kim predicts the won will rise as high 1,063 against the greenback, data from currency experts and investment banks shows it could trade anywhere between 1,000 and 1,130 this year.

Meanwhile, companies that have much of their debts denominated in dollars potentially stand to benefit from a stronger won.

As the airline uses dollars to buy its fuel and lease aircraft, a stronger won presents itself as good news. It would make the two A380s it is due to purchase this year more cost-effective as the Korean flagship moves to expand its international routes. Another side effect of the rising won is that it makes overseas travel cheaper and bumps up demand for flights.

Moreover, oil refineries, electricity generators and other companies that purchase raw ingredients from overseas to produce processed goods should see their costs ease. Korea Electric Power Corporation (Kepco), which has been struggling with chronic losses since 2008, even expects it may swing back into the black this year.

“If the cost of electricity rises 5 percent in the first quarter, Kepco should see a profit this year,” said Hwang Chan-sik, an analyst at Shinyoung Securities.

“Utilities companies stand to make gains as long as the won keeps strengthening, and we this trend will last throughout 2013.”