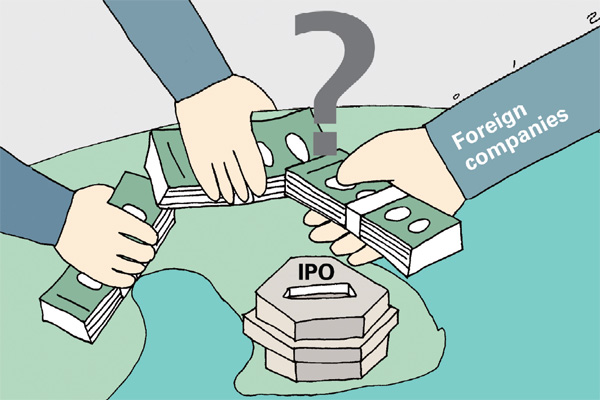 In a bid to avoid a repeat in 2013, the Financial Services Commission (FSC), which sets policies, and the Korea Exchange (KRX) are gearing up to overhaul regulations for foreign companies that aspire to list on either the Kospi or secondary Kosdaq, industry sources said last week.

Reform measures could be implemented by late February as part of the top financial regulator’s plans to ease IPO qualification requirements. Many IPO candidates and investment banks, which manage the deals, have complained that the current rules are excessively strict.

“We have decided there is no need to apply an overly strict measuring stick on foreign companies that we already know are qualified,” said an official at the capital market department of the FSC.

One of the rules that disgruntled industry figures claim is unnecessary states that a foreign IPO candidate with more than 2 trillion won ($1.9 billion) capital must have at least three outside directors. Those that do not meet the requirement are supposed to go through the complicated process of amending their company regulations and gaining approval from their board members.

The regulator is also working on measures to better treat those deemed qualified. One of the proposals would exempt companies from part of the screening process and potentially allow fast-track approvals for Fortune 500 companies or those with a market cap of 1 trillion won or more.

But both the FSC and KRX may come in for flak due to their inconsistent policy-making given that the reform comes just over a year after the latter revised its securities-listing regulations by strengthening both its disclosure requirements and listing standards for foreign companies.

The measure, which was implemented on Nov. 4, 2011, came after a chain of problems related to cases of corruption at listed companies. Trading in shares of China Gaoxian Fiber Fabric Holdings ended two months after it listed on the Kosdaq on Jan. 25, 2011 after the company was found to have engaged in sustained accounting fraud. Nepro IT, a Japanese company, was delisted on Nov. 5 of the same year on embezzlement charges.

The incidents sparked debate that the government had been neglecting to properly protect investors as it flung open the door to foreign companies in hope of becoming a key financial hub in Asia.

The issue of investor protection may emerge again following the regulatory change in February as the entry barrier for foreign companies wishing to list in the country is lowered.

“Protecting investors and attracting foreign companies to the local stock market are to a certain degree contradictory policies,” said a lawyer who specializes in investment banking at a local financial firm. “Finding the right balance is very important,” she added, requesting anonymity.

Korea’s desire to woo only high-caliber foreign companies may not be “realistic,” she added, especially given that many interested parties hail from China and are often a few rungs down the ladder than those targeting more advanced financial markets such as New York and Hong Kong. If Korean regulators shun them, the number of non-Korean companies adding their names to the domestic could decline further, she warned.

The situation in Japan in 2010 highlights the potential pitfalls of this approach. Excessive government-led efforts to protect investors by applying rigorous listing standards saw the number of listed foreign companies on the Japanese market plummet from 120 in the 1980s to around one-tenth of this two years ago.

Korea saw its first two foreign IPOs in 2007. The figure rose to six in 2009 and seven in 2010, but dropped to two in 2011 as nine foreign companies, including six from China, ditched their plans to list as they lost confidence in their chance of success as investor sentiment weakened.

“Investors’ confidence in foreign companies has sunk to its lowest level due to a number of negative precedents,” said an executive at a domestic securities firm. “Securities companies, which use to be passionate about foreign companies’ IPOs, have now lost much of their interest.”

Whether more foreign companies list this year will depend heavily on how bullish the domestic stock market is, he said. But many experts remain skeptical.

There are currently five foreign firms listed on the Kospi and 12 on the Kosdaq. A total of four have been delisted and a fifth ? Gaoxian ? looks set to soon be axed.

Access Bio, a U.S. bio firm, and M-Biz Global, a British IT firm, are known to be preparing to list this year.

The market for IPOs by domestic companies also had a nightmarish year in 2012 amid the global economic downturn. According to the KRX, 28 companies listed, down from 74 in 2011 and the lowest since 1998, in the wake of the Asian financial crisis.