Parties agree on budget for 2013

Parties agree on budget for 2013 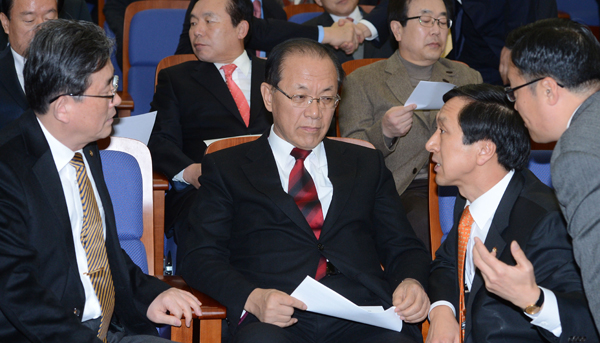 The National Assembly was set to pass this year’s budget bill yesterday at a plenary session last night, calling for increased spending on welfare to carry out pledges made by President-elect Park Geun-hye.

According to the plan, the bill was to be passed after press time for this newspaper for a 2013 government budget of 342.7 trillion won ($320 billion), a 200 billion won increase from the initial government proposal of 342.5 trillion won.

Lawmakers on the Assembly’s Special Committee on Budget and Accounts cut 4.1 trillion won from the original proposal and added 4.3 trillion won in spending, including an extra 1.4 trillion won for free day care for children, another 525 billion won to reduce college tuition and an extra 146.8 billion won to support four major insurance fees for low-income households.

It was the first time in five years that the budget bill was to be passed with bipartisan agreement.

“There have been almost no years [that the budget bill passed] based on [bipartisan] agreement,” said President-elect Park yesterday while attending a general assembly of the Saenuri Party’s lawmakers. “I can recall the times when we ate lunch sitting on the cold floor and stayed up all night. It’s a pity that every year [the passage] gets delayed, but it’s fortunate that it has been agreed on today.”

Lawmakers decided not to issue additional bonds to cover Park’s welfare pledges, which had been an issue of controversy between the ruling and opposition parties.

“We [decided] not to issue state bonds,” said Kim Hack-yong of the budget committee.

The planned bill cut the government’s budget to introduce a next generation of fighter jets by 130 billion won, which is about a 30 percent cut from the initial government proposal of 460 billion won.